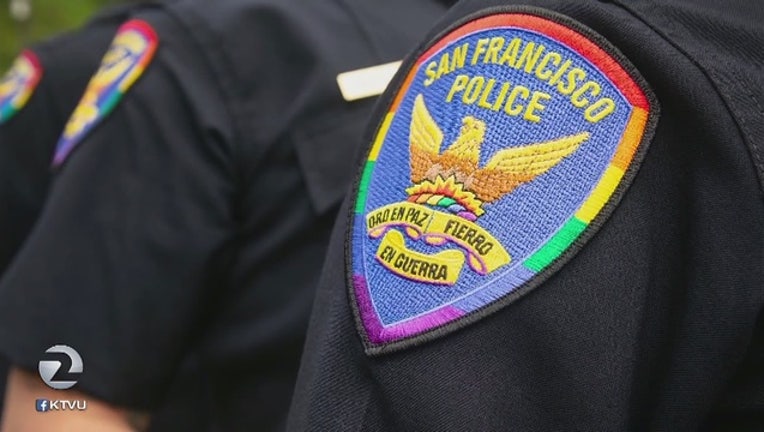 SAN FRANCISCO - The political divisions and disagreements over San Francisco Police Department officers marching in uniform at this year's Pride parade seems to have made progress Thursday in the form of a resolution.

SFPD Chief Bill Scott said he was pleased that the San Francisco Police Officers Pride Alliance and San Francisco LGBT Pride had come to an agreement.

"Our police officers will be part of a contingent of front-line public safety employees led by Mayor London Breed. The SFPD remains committed to ensuring the safety and security of our diverse communities," Chief Scott's statement read.

Mayor London Breed sided with police last week over the uniform controversy when she announced she was opting out of the Pride parade, because of SF Pride's decision from 2020 to not allow participating law enforcement to wear their uniforms in the parade.

Ahead of the agreement's announcement, the mayor on Thursday held her annual Pride flag raising ceremony at City Hall.

Leather and LGBTQ cultural district, along with the Castro and Transgender districts said they wouldn't attend the flag-raising ceremony unless Mayor Breed reversed her decision.

At the mayor's ceremony on Thursday, she offered an apology. "I apologize for not also recognizing the hurt and the pain that I know some feel as a result of their own interactions and engagement with law enforcement."

Meanwhile, the San Francisco Police Officers Pride Alliance on Wednesday had asked SF Pride to reverse their decision to allow officers to march in uniform.

The uniform disagreement stems in part from George Floyd's murder by police and the aftermath that included widespread calls of police reform that dominated 2020. Pride marches and resistance movements have historically been uprisings against discrimination and oppression.

In 1966, the Compton's Cafeteria riots in San Francisco's Tenderloin marked a revolt by the transgender community directed against police brutality. San Francisco recognized this and has a plaque engraved within its Transgender District marking this civil rights milestone. The riots stood up against police raids before the acronym LGBTQ was even coined. It also predates the violent 1969 Stonewall uprising against police who would raid and harass LGBTQ bars in New York City.

The Pride parade is June 26.