San Francisco's public defender's office shows surveillance video of a homeless man being attacked before he became the suspect in the assault of two elderly Asians at UN Plaza last month. The public defender says his client has mental health issues and doesn't believe his actions were racially motivated.

SAN FRANCISCO - New details emerged Thursday in the high-profile case of an elderly Asian woman and man who were the victims of assault at San Francisco’s UN Plaza last month.

The San Francisco public defender’s office shared surveillance video from the scene that shows the situation is more complex than it first appeared. The deputy public defender said his client, Steven Jenkins, 39, who is homeless, has mental health issues and doesn't believe his actions were racially motivated.

The video shows Jenkins was first attacked in a separate incident and the defender suggests he was in a diminished mental state and disoriented.

Jenkins was arrested by San Francisco police March 17. He has pleaded not guilty to six felonies. 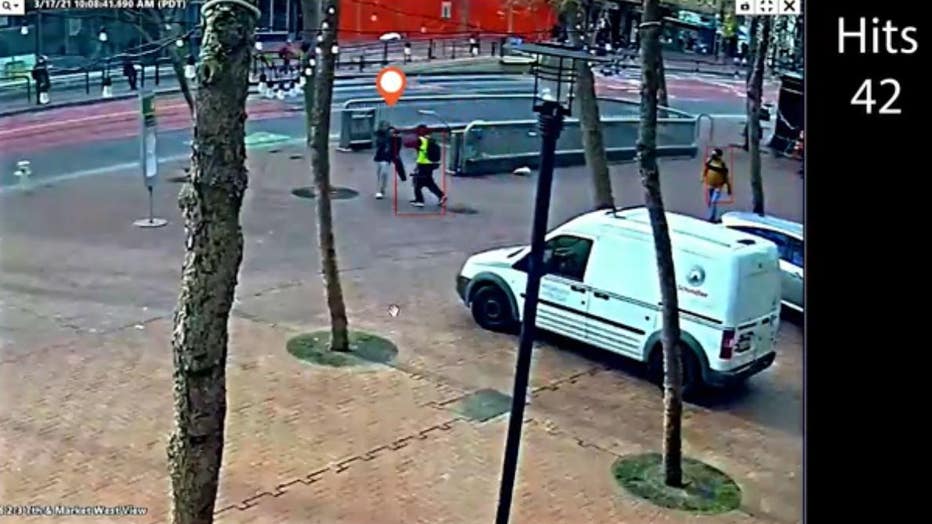 The video shows Jenkins enduring a three minute attack from as many as four people at UN Plaza prior to encountering Xiao Zhen Xie, 75, and Ngoc Pham, 83, that same day.

The video has multiple angles and includes a ticker on the right side that indicates how many blows Jenkins suffered, many to his head, before he encountered the two elderly victims.

The incident happened on a Wednesday at a time when UN Plaza is usually bustling from the The Heart of the City Farmers Market as well as from those who gather to sell their wares on the sidewalks.

"What happened that day was not the norm for him," Deputy Public Defender Eric McBurney said of his client. "He has no prior convictions for physically hurting anyone. He has struggled throughout his life on the street, largely ignored by society. Even when he is attacked and hit over 40 times in broad daylight in the busy UN plaza, not one person comes to his aid."

In the video, Jenkins appears to be leaving the market area when someone wearing a fluorescent vest and a backpack unloads on him with a barrage of heavy-fisted blows. He had already been punched multiple times by others at a nearby location as the video shows.

Most people can be seen ignoring the situation and hurry by to avoid the commotion.

Jenkins appears dazed as he retreats from his attacker. He turns back around, swinging wildly into the air. Xie, appears to be selling items nearby on the sidewalk as the violence ensues.

Jenkins stumbles near her, swings again and lands a blow to her face, whether he intended to or not, as she is standing and sorting her items. A security guard immediately pounces and strikes Jenkins with his nightstick.

With Jenkins pinned to the ground by the guard, Xie picks up a stick to strike Jenkins’ legs with it. When she continues striking, multiple officers, who had by then responded, try to calm her down and stop her.

When this story broke, it took on a viral quality especially given the surge in anti-Asian hate and the narrative that a ‘grandma’ bloodied her attacker and sent him to the hospital, but the video shows Jenkins had already been bloodied and brutalized by nearly 50 blows from multiple people.

The woman victimized in last month’s unprovoked attack pledged to donate $900,000 from a Gofundme account started on her behalf, to the Asian American community. The account, organized by her granddaughter, now has more than $1 million in donations.

McBurney called the assaults on the elderly victims, "troubling at a time when Asian Americans locally and nationally are suffering from an escalation of violence and anti-Asian racism." He identifies as an immigrant from Taiwan himself and expressed sympathy for the victims and their families.

"This situation is a tragedy on many fronts. There were three victims of assault that terrible morning."