The long-awaited San Francisco Central Subway expansion project is set to debut Saturday. Service will start as weekends only before full service begins in the new year. The line extension runs from 4th and Brannan Streets, north to Chinatown.

SAN FRANCISCO, Calif. - The long-awaited debut of the Central Subway is set for Saturday morning with Muni Metro trains connecting South of Market to Chinatown in San Francisco.

The Central Subway has four new stations, including the above ground platform at Fourth and Brannan streets, and three underground at Yerba Buena/Moscone Center, Union Square and Chinatown. The trains run along Fourth and Stockton streets. 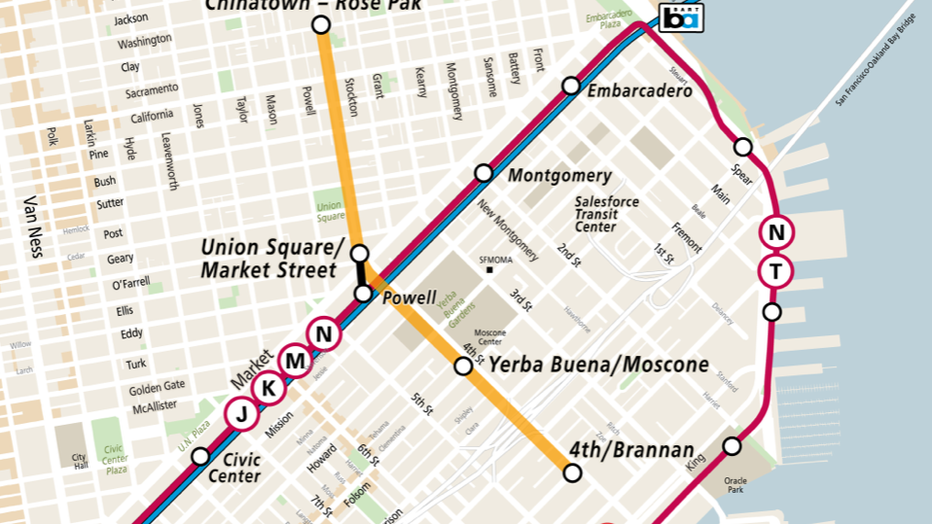 "If you’re trying to get to Chinatown from anywhere on the BART system, anywhere on the Muni Metro line, change trains at Powell Street and get on the Central Subway," SFMTA Streets Director Tom Maguire said. "One stop, you’re in Chinatown in 90 seconds. It’ll open up the whole region to Chinatown businesses."

The extension will only initially operate on weekends between 8 a.m. and midnight. Trains are expected every 12 minutes.

Fares are free through the end of the year, so riders can try out the trains and avoid heavy traffic and congestion.

Full service is anticipated to be up and running by January 7, running seven days a week from Chinatown to Mission Bay. It will connect to the existing T-Third Street line down to Sunnydale.

The Central Subway has been a long time coming and costly at $1.95 billion. It is four years behind schedule.

"I don’t know why they took so long and they hurt business a lot," said Chinatown business owner Raymond Hong. "We have been waiting for more than 10 years. I hope it will be better."

Several Chinatown business owners tell KTVU they are relieved the noise and dust are nearly over and are anticipating more tourists and visitors to their neighborhood.

"We know communities have endured a lot of noise and dust and disruption," Maguire said. "We’re just hoping that starting Saturday morning, they’ll see that it was all worth it."