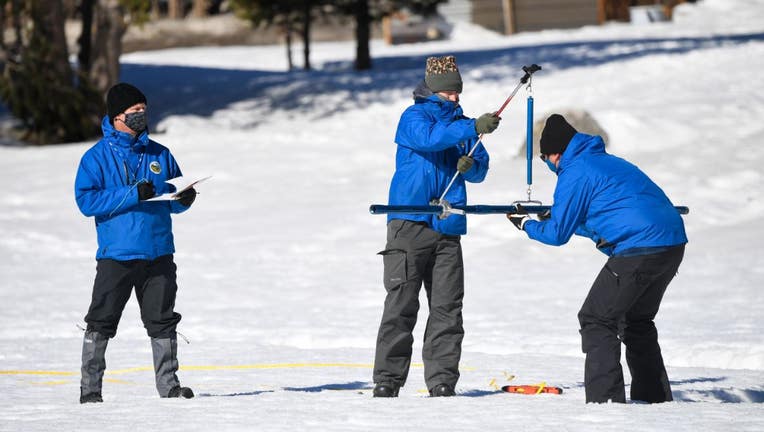 State water officials say the Sierra Nevada is experiencing its snowiest start to the winter season in a decade, thanks to a handful of storms that dropped several feet of snow.

November rains helped saturate the soils and primed them for runoff in the future, and early December flurries gave some areas up to 2 to 4 feet of snow, with more to come through New Year's Day, state officials predict.

The statewide snowpack is about 163 percent of average for this time of year, said Sean de Guzman, who manages the California Department of Water Resources' annual snow surveys.   The surveys forecast the state's water supply for a year based on how much water content is in the Sierra Nevada's snowpack.

The first snow survey of the 2023 snow season is tentatively scheduled to be recorded on Jan. 3.

But de Guzman cites the number with an air of caution.

"It's promising, but at the same time, we're all familiar with what happened last year in December," de Guzman said.

This time last year, snow depths were reaching 150 percent of normal levels: a hopeful start to the season. That was until California was hit with the driest January, February and March on record.

"We started off the year looking great," de Guzman said.

"But I forewarned everyone around that time that it's really, really early in the snow season," he added.

De Guzman said the 2022 snow season had an eerily similar start to 2013's water year, which turned into the driest year on record despite its impressive snow levels before the new year.   A white Christmas is not enough to sustain what makes up one-third of California's annual water supply -- the snowpack needs to be built up all the way through April to ensure the state has enough mountain snow to slowly drip off into state reservoirs well into the dry months.

As California further descends into challenges associated with climate change, state agencies are bracing to deal with the most unpredictable circumstances, teetering back and forth between record dry times and record wet ones.

It makes it challenging to plan for how much water the state will have in the upcoming year, said de Guzman.

"Maybe 10 years ago, in 2013, we never thought of that being a possibility, especially with the wettest months of the year being December, January and February. Who's to predict that you'd basically get no rain and snow during those months?" de Guzman said. "It's now in the realm of possibility."

And one good season of snow will likely not be enough to make up for the estimated two to three years of rain and snow that did not arrive in California's previous decade.

De Guzman said the only path forward is setting up resilient water infrastructure that can conserve every drop. His own team is looking to modernize how DWR measures snow in the multiple surveys it collects at the Phillips Station southwest of Lake Tahoe every year.

Instead of using snow tubes and sensors in the wilderness, the future may be using aerial remote sensing, in which a scanning device attached to an airplane captures exactly how much water content is in a 3-by-3 meter grid, said de Guzman.

"It's really exciting to see where we were and where we're headed to," he said.

De Guzman added that he's confident that the snowpack will be well above average once they collect the first survey at the beginning of 2023.

"Winter is a long way to come. Hopefully nothing like last year or even 2013 will happen again, and we will just keep building up more snow," de Guzman said.