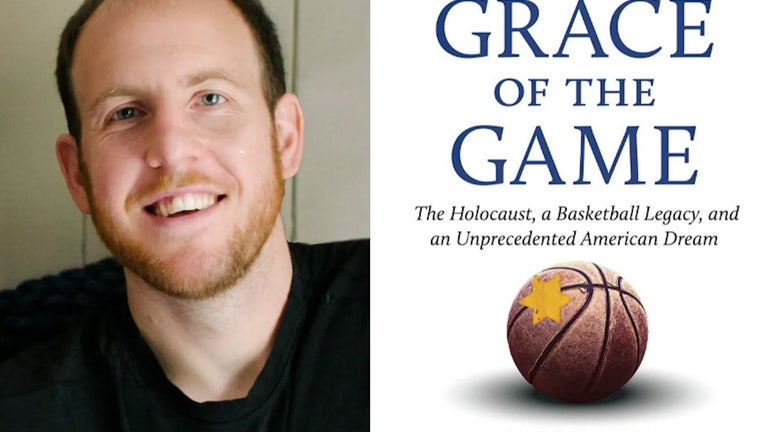 Author Dan Grunfeld’s grandmother survived the Holocaust. His father Ernie Grunfeld would go on to win an Olympic gold medal and reach previously unimaginable heights as an NBA player and executive. Dan Grunfeld tells the story in his new book, "By t

In "By the Grace of the Game: The Holocaust, a Basketball Legacy, and an Unprecedented American Dream," the son of former NBA star and front-office executive Ernie Grunfeld shares the incredible story of his family's journey from Auschwitz to New York City, the Olympics and pro basketball fame.

Dan Grunfeld, who played college hoops for Stanford, poignantly writes of his grandmother Anyu, who lost her parents and five of her siblings in the Holocaust -- and later lost a son to illness.

Despite these tragedies and multiple obstacles, her son Ernie, a Romanian immigrant, learned to speak English and discovered, as a youth on the streets of New York, that basketball was a way to fit in.

Ernie became a college legend at the University of Tennessee and won gold at the 1976 Summer Games. He went on to be a standout player for the New York Knicks, and later, the president and general manager of the team during its 1990s glory days. He's the only player in NBA history whose parents survived the Holocaust.

Dan Grunfeld was a two-time Academic All-American and played professionally for eight seasons overseas. A resident of Menlo Park, he earned his MBA from the Stanford Graduate School of Business in 2017 and works for a venture capital firm. "By the Grace of the Game," which will be released Nov. 30, is his first book.

What spurred you to write your book?

Dan Grunfeld: It had been percolating in my head for a decade or so. The story has always meant so much to me, but I'd been busy playing basketball, going to school and starting a family ... I finally got to the point where I said, "Now's the time," and started making sense of it all. I love to write, and I was super-motivated to tell the story. I put my heart into it.

This had to be an emotional undertaking. What were you feeling as you delved into the story?

Grunfeld: I felt the full range of emotions. There were times when it was joyful and amazing, and there were times when I dealt with really painful things. It was such an intense experience. It had me living in these certain moments -- like my dad coming to America and discovering the game of basketball. But then there were the horrors of the Holocaust.

The hardest part was talking to my dad and grandmother about the death of my uncle. That's not something dad speaks about a lot. It was such a traumatic experience for our family.     The amount of historical detail -- especially regarding the Holocaust -- is impressive.

What went into that?

Grunfeld: I spent five years, off and on, doing research. I was determined to tell a very rich, full and detailed story. I've always been a history lover, and my dad is, too. When he's not watching basketball, he's watching the History Channel.     Did anything catch you by surprise during your research?

Grunfeld: I was thrilled to learn about my dad's playing days at Tennessee. I knew he and Bernard King were great teammates and stars at the time. But I talked to fans who lived through it and told me, "You have no idea how big a hero your dad was." Someone even called it "Ernie G mania." He took Tennessee by storm and was loved and celebrated. It was a phenomenon.   And what's amazing is that no one at the time knew what he endured to get there. Basketball gave my family and my dad a new life. It allowed him to move away from all that tumultuous stuff.

It often seems that many younger people don't really have an interest in the experiences of their elders. How did you manage to avoid that mindset?

Grunfeld: You can tell by reading the book that my family is very close, and that I'm incredibly close to my grandmother. My basketball pursuits were largely informed by what my family went through. I wanted to learn about it and respect it.

And let others know about it -- especially the atrocities of the Holocaust.

Grunfeld: Yes. It's a hard story to tell, but it needs to be told. It's so unfathomable, in this day and age, to think about the numbers: Some 6 million people coldly murdered. It's difficult to wrap your mind around. But it's not all that long ago and not that far away. It's the story of humanity, and we need to know it.

How concerned are you about the flare-ups of violent antisemitism that continue to occur in the United States and elsewhere?   Grunfeld: I am quite concerned. Data shows that it has gotten worse, and it's sad to say that doesn't surprise me. There is a lot of hatred and intolerance in the world, and we've seen what those forces can lead to. That's why it's important to tell these stories and have conversations with one another. We have to stand up against the hatred and treat people with fairness and respect.

Your book also includes memories of your Stanford playing days, including the 2003-'04 Pac-10 Championship team that was ranked No. 1 in the nation for much of the season. Do you guys stay in touch?

Grunfeld: We're brothers and always will be. We've got a text chain going, and we had a reunion a few years ago. When you play basketball with people, it brings you together. As my dad likes to say: "The ball doesn't know what language you speak. It doesn't care where you're from."

You had some incredible moments as a player, but you also write about what you call an "unhealthy" obsession to prove yourself.

Grunfeld: I was really tightly wound. It came from a good place: I was so motivated and determined to do well. I was trying to make people proud -- trying to make good on what my family went through. It felt like an obligation. But when you squeeze something too hard, it can pop out of your hand.

Looking back, what would you tell your younger self?

Grunfeld: I would tell him to smile.

The book also contains some humorous moments. No spoilers here, but there's a funny story about how you were at a dinner with Larry Bird and struggled with an active bladder through the whole night because you didn't want to go to the restroom and miss anything he had to say.

Grunfeld: That's what life is: There are hard times and moments of great sadness. But there's humor, too, and I wanted to convey that. Also, it shows my deep, deep love for basketball. The crux of that story is that I refused to remove myself from that man's presence.

You speak so lovingly of hoops throughout the book. Do you remain a fan?

Grunfeld: For me, basketball will never be in the past. I was born into the game. But I've got family commitments now, so I watch when I can -- and not just the NBA, but college, and both men and women.

Who do you root for?

Grunfeld: I root for teams that I have friends playing for. And I always like to see the Knicks succeed. There's nothing like Madison Square Garden when the Knicks are doing well. The excitement. The buzz. ... My dad and I were there recently, and we were walking around the concourse. We looked at each other, pretty much in awe. You feel the history. It's in the air.

Finally, what do you want readers to take away from this book?

Dec. 1, 1 p.m.: The Book Passage in Corte Madera and San Francisco hosts a free virtual book event with Dan Grunfeld on "By the Grace of the Game." To attend on YouTube, visit:  https://bit.ly/3oPLk8g.