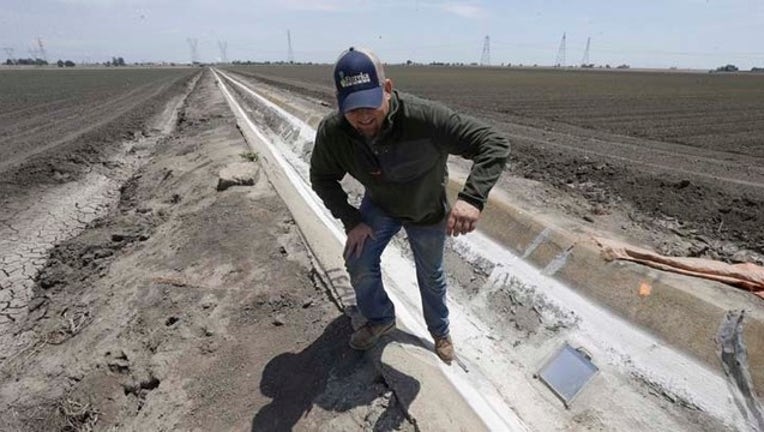 SACRAMENTO, Calif. (AP) -- California regulators Friday accepted a historic offer from a group of farmers holding some of the state's strongest water rights to voluntarily reduce their water use by one-quarter to stave off deeper, mandatory cutbacks amid one of the worst droughts on record.

Officials hope the deal will serve as a model for more such agreements with growers in the nation's top-producing farm state, where agriculture accounts for 80 percent of all water drawn from the state's rivers, streams and groundwater sources.

"We're in a drought unprecedented in our time. That's calling upon us to take unprecedented action," Felicia Marcus, chairwoman of the state Water Resources Control Board, said in announcing the agreement.

The rare concession from the farmers is the latest indication of the severity of the water shortage in California, which is suffering through its driest four years on record.

California water law is built around preserving the rights of the so-called senior rights holders -- farmers and others whose acreage abuts rivers and streams, or whose claims to water date back a century or more, as far back as Gold Rush days.

The offer potentially could cover hundreds of farmers in the delta of the Sacramento and San Joaquin rivers, the heart of California's water system. Some of the farmers made the offer after state officials warned they were days away from ordering the first cuts in more than 30 years to the senior water rights holders.

The state already has ordered cities and towns to cut their water use by 25 percent, and it has curtailed water deliveries to many other farmers. But in recent weeks, many city dwellers and others have complained that agriculture should be made to share more of the sacrifice.

By itself, the delta farmers' offer would not go far enough to save drying, warming waterways statewide. But if more farmers sign on across the state, California could save significant amounts of water, since senior water rights holders alone consume trillions of gallons a year.

While California produces nearly half of the fruits, nuts and vegetables grown in the U.S., agriculture experts say they would expect only modest immediate effects on food prices from any reduction in water for the senior water rights holders. Other regions would be able to make up the difference, economists say.

Under the deal, delta farmers have until June 1 to lay out how they will use 25 percent less water during the dry summer. That could include irrigating their crops less or leaving some of their land fallow.

The agreement "is an illustration of creative practical approaches that water managers in the state of California are taking to help get us all through this devastating drought," said Michael George, state water master for the Delta.

Senior water rights holders last saw their water cut back in 1977, but that move applied only to dozens of people along a stretch of the Sacramento River.

Any accord with the Delta farmers would probably rely largely on the honor system. California currently does not require monitoring or meters for superior rights holders.