Stephen Curry sat down with billionaire philanthropist Bill Gates as part of a new series of interviews in which the Warriors star tackles pressing issues currently facing the country. 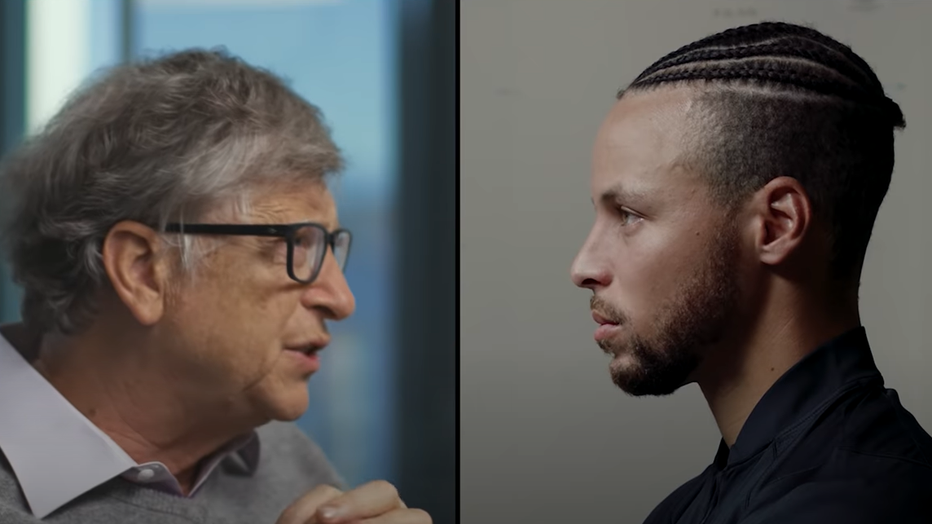 The series called “State of Inspiration” was launched on Tuesday featuring the 23-minute taped interview with the Microsoft co-founder.

Through a video call, Curry started the conversation asking the technology giant to offer up advice to young people emerging into the workforce amid the uncertain market. "I don't know when the last time that you've done a job interview," the NBA star said and went on to fire off some job interview questions for Gates to give his take on how best to answer them.

The main focus of Curry's interview was on what he called “secondary problems” that have resulted from COVID-19, including misinformation on the internet, food insecurity, mental health struggles, and gaps in education.

"I was one of the voices that warned that something like this could happen," Gates explained. The Bill and Melinda Gates Foundation is the the world’s largest private foundation with a focus on global health and education initiatives. For years, it has been warning about the dangers of a global viral outbreak. Gate admitted though, "even I didn't appreciate how inequitable this would be, including the death rates and the infection rates in inner city communities."

Curry asked Gates about how the pandemic has disproportionately affected Black and brown communities, citing statistics from the Centers for Disease Control and Prevention: “2.6 times more likely for a Black person and 2.8 times for the Latinx community to contract this disease,” Curry said. “From your vantage point, knowing issues that have been prevalent long before this pandemic, that have only been accelerated, how can we curb this, put the right resources in the right place?”

Gates responded, “Communities of color still have far less access to testing diagnostics than the average American and so the fact that the testing resources -- who gets the quick results -- it’s not in these inner city communities where a lot of the burden is. That’s an injustice. That should be fixed," he said, adding, "Likewise as we do the vaccine trials, we’ve got to make sure that people who volunteer are very diverse so that we have enough representation from the groups that are being hit the hardest, and we understand, is it safe, is it effective in those groups?”

Gates went on to discuss how racial inequities as a whole must be addressed. “It is very sad that at the same time we see racial injustice through policing,” he said. “We have this raging pandemic that is messing up these communities and setting them back, and so hopefully the awareness that we get out of these tragic facts drives us to solve specifically the Covid-related problem and looking at the broader gaps.”

Curry’s launch of his new interview series comes ahead of the Nov. 3 elections and as he has become more vocal on political issues.

Back in June, he marched in Bay Area Black Lives Matters protests, he’s been an outspoken critic of Donald Trump, and he and his family appeared in a video during the Democratic National Convention. He's also been actively engaged in get-out-the-vote efforts.

In March, the three time NBA champ hosted an interview and Q & A session on Instagram with Dr. Anthony Fauci, director of the National Institute of Allergy and Infectious Diseases, aimed at flushing out the facts on the coronavirus.

For Tuesday’s interview release, Curry wrote,"I had a great conversation with Bill Gates last week!" and said they discussed "what is needed to mitigate these devastating problems until the strain from COVID-19 eases and America can get back to a new normal.”