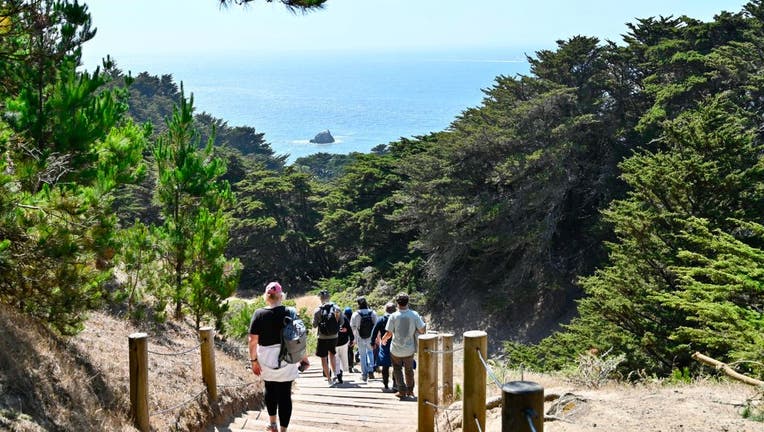 People are walking on the Lands End trail of the Presidio park in San Francisco, California on August 2, 2020. (Photo by Daniel SLIM / AFP) (Photo by DANIEL SLIM/AFP via Getty Images)

Sunday is the last day for the public to submit comments about fees proposed for areas that currently have free parking, such as Stinson Beach, Baker Beach, Lands End Lookout, Sutro Heights, China Beach, and Rodeo Beach and Fort Cronkhite.

The parking fees would be $3 per hour or $10 daily between 8 a.m. and 5 p.m., according to the National Park Service. In addition, a fee ranging from $8 to $16 would be charged for evening tours at the Point Bonita Lighthouse.

The fees will unfairly impact most visitors, neighborhoods and communities that use the recreation areas, the Crissy Field Dog Group wrote in a letter Saturday to the Golden Gate National Recreation Area.

"Since some of these areas are located in San Francisco, increased traffic and congestion in the
adjacent neighborhoods are highly likely," wrote Martha Walters, chair of the Crissy Field Dog Group. "No one likes to pay for parking so visitors will park on the city streets and possibly block neighbor's people's driveways."

The park service says the fees are needed to fund operations due to big crowds flocking to national park sites around the Bay Area. More than 12.4 million people visited GGNRA sites in 2020, the park service said.

Many visitors travel by bicycle or walk to the park sites, and can also take public transit available near many of the affected parking lots, including Stinson Beach, Lands End and Baker Beach, according to the park service.

An estimated 80 percent of money collected from fees is retained by the park, according to the park service.

"By paying these fees, visitors help to fund trash collection and custodial services, traffic control operations during peak season weekends and holidays, and repair or replacement of damaged park signs on trails, roads and parking lots," according to the park service summary of the proposed fees.

A community coalition opposing the new parking fees, however, maintains the fees are essentially an entry fee to the open spaces.

"The GGNRA is an urban recreation area used by millions of people in the Bay Area, many of whom use these open spaces every single day in order to hike, run, surf, bird watch, board sail, walk their dogs, or simply be outside. We need continued access to these places for everyone, not just those who can afford it," said Miranda Darley, a Mill Valley resident and petition organizer for Keep Our GGNRA Beaches Free.

If approved, the parking fees will be phased in over several years, starting in mid-to-late 2022.

The fee for the after-hours lighthouse tour would take effect at the start of next year.

Earlier this year, the park service also proposed fees for camping in the Marin Headlands, parking at four lots in the Presidio, and tickets for evening tours at Fort Point National Historic Site.

Information about the proposed fees is available at https://www.nps.gov/goga/learn/news/fees-proposed-for-2022-to-aid-park-operations.htm.