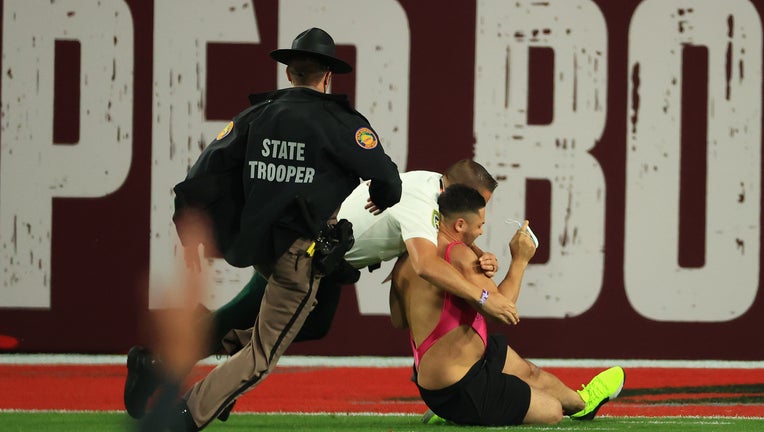 A fan is tackled by law enforcement after running on the field during the fourth quarter of Super Bowl LV between the Tampa Bay Buccaneers and the Kansas City Chiefs at Raymond James Stadium on February 07, 2021 in Tampa, Florida. (Photo by Mike Ehrm

TAMPA - An unknown man slipped onto the field at the Super Bowl and ran toward midfield, drawing applause from the 25,000 fans in attendance.

The unidentified man took off his shirt, waved it above his head and kept running. He appeared to have been wearing a revealing, pink one-piece before partially pulling down his shorts, exposing much of his backside. He slipped between two security guards and then made a beeline for the goal line.

With more security closing in, he wisely slid at the 3-yard line. But he wasn’t afforded the same protection as NFL quarterbacks. Guards piled atop him as he hit the grass, tied his hands and escorted him into a nearby tunnel. He got another ovation as he exited the stadium.

The Chiefs trailed 31-9 and managed just three field goals at the time of the streaker’s appearance.