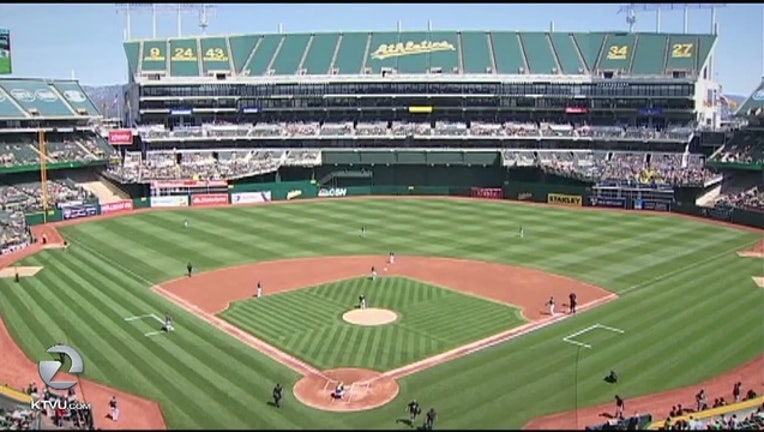 OAKLAND, Calif. - The Alameda County Board of Supervisors will meet in a special session at noon Monday to consider approving the sale of the county's stake in the Oakland Coliseum complex to the Oakland Athletics baseball team.

Property listed on the agenda item includes the 53-year-old stadium and arena, the former Malibu Grand Prix property next to the complex and the Oakland Raiders training facility at 1220 Harbor Bay Parkway in Alameda.

Supervisors Nate Miley and Scott Haggerty said in a joint statement that, as members of the Joint Powers Authority that governs the complex, they "have led the negotiations and played instrumental roles in moving the sale of the county's share forward in the hope that, once finalized, the $85 million valuation will relieve the county of debt which has weighed on taxpayers for decades."

The city of Oakland, the other partner in ownership of the complex, had sued the county seeking to stop the sale of the 155-acre complex. The city dropped the suit in late September.

If supervisors approve the sale the Athletics will begin a 190-day process of reviewing the real estate purchase before the transaction is finalized, according to the statement.

The team is exploring building a new downtown ballpark at Howard Terminal and redeveloping the Coliseum property in East Oakland.

Haggerty, in a statement, called the pending action "a great day for both fans and taxpayers," saying, "I am happy that after all of this time and these discussions, we now have a path to keep the A's in Oakland and pay down our debt."

Miley said that "The equitable purchase price removes the current tax burden on Alameda County taxpayers, and the City of Oakland maintains authority for the Coliseum site and control over land use development."

Oakland would retain its half-ownership of the complex.

The meeting starts at noon in the supervisors chamber on the fifth floor chamber of the Alameda County Administration Building, 1221 Oak St. in Oakland.