Satellite imagery from August 16 shows the chaotic scenes at Kabul Airport that morning as thousands of people flocked there in a bid to escape after the Afghan capital fell under Taliban control the previous day. (Credit: Maxar Technologies via Storyful)

KABUL, Afghanistan - The Taliban declared an "amnesty" across Afghanistan and urged women to join their government Tuesday, seeking to convince a wary population that they have changed a day after deadly chaos gripped the main airport as desperate crowds tried to flee the country.

Following a blitz across Afghanistan that saw many cities fall to the insurgents without a fight, the Taliban have sought to portray themselves as more moderate than when they imposed a brutal rule in the late 1990s. But many Afghans remain skeptical.

Older generations remember the Taliban’s ultraconservative Islamic views, which included severe restrictions on women as well as stonings, amputations and public executions before they were ousted by the U.S-led invasion that followed the Sept. 11, 2001, terror attacks.

While there were no major reports of abuses or fighting in the capital of Kabul as the Taliban now patrol its streets, many residents have stayed home and remain fearful after the insurgents’ takeover saw prisons emptied and armories looted. Many women have expressed dread that the two-decade Western experiment to expand their rights and remake Afghanistan would not survive the resurgent Taliban. 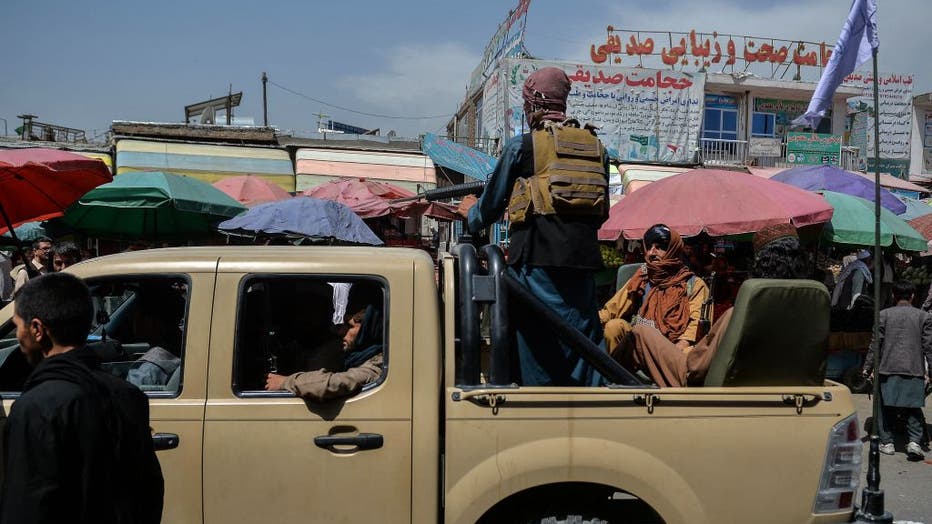 Taliban fighters on a pick-up truck move around a market area, flocked with local Afghan people at the Kote Sangi area of Kabul on August 17, 2021, after the Taliban seized control of the capital following the collapse of the Afghan government.(Photo

The promises of amnesty from Enamullah Samangani, a member of the Taliban's cultural commission, were the first comments on how the Taliban might govern on a national level. His remarks remained vague, however, as the Taliban are still negotiating with political leaders of the country’s fallen government and no formal handover deal has been announced.

"The Islamic Emirate doesn't want women to be victims," Samangani said, using the militants' name for Afghanistan. "They should be in the government structure according to Shariah law."

That would be a marked departure from the last time the Taliban was in power, when women were largely confined to their homes.

RELATED: Taliban seizes Afghanistan: What happened and what could come next

Samangani didn't describe exactly what he meant by Shariah, or Islamic, law, implying people already knew the rules the Taliban expected them to follow. He added that "all sides should join" a government.

It was also not clear what he meant by an amnesty, although other Taliban leaders have said they won’t seek revenge on those who worked with the Afghan government or foreign countries. But some in Kabul allege Taliban fighters have lists of people who cooperated with the government and are seeking them out.

Rupert Colville, a spokesman for the United Nations' high commissioner for human rights, noted both the Taliban's vows and the fear of those now under their rule.

"Such promises will need to be honored, and for the time being — again understandably, given past history — these declarations have been greeted with some skepticism," he said in a statement. "There have been many hard-won advances in human rights over the past two decades. The rights of all Afghans must be defended."

Notably, a female television anchor on the private broadcaster Tolo interviewed a Taliban official on camera Tuesday in a studio. Meanwhile, women in hijabs demonstrated briefly in Kabul, holding signs demanding the Taliban not "eliminate women" from public life.

On Tuesday, Kabul's international airport, the only way out for many, reopened to military evacuation flights under the watch of American troops.

All flights were suspended on Monday when thousands of people rushed the airport, desperate to leave the country. In shocking scenes captured on video, some clung to a plane as it took off and then fell to their deaths. At least seven people died in the chaos, U.S. officials said.

A crowd of people ran towards Kabul’s international airport on the morning of August 16, 2021, as citizens tried to flee after the Taliban took control of the capital. Credit - Jawad Sukhanyar via Storyful

Stefano Pontecorvo, NATO's senior civilian representative to Afghanistan, posted video online showing the runway empty with U.S. troops on the tarmac. What appeared to be a military cargo transport plane could be seen in the distance from behind a chain-link fence in the footage.

"I see airplanes landing and taking off," he wrote on Twitter.

Overnight, flight-tracking data showed a U.S. military plane taking off for Qatar, home to the U.S. military Central Command's forward headquarters. A British military cargo plane also was flying to Kabul after taking off from Dubai. Other military aircraft remained in the air in the region.

Still, there were indications that the situation was still tenuous. The U.S. Embassy in Kabul, now operating from the airport, urged Americans to register online for evacuations but not come to the airport before being contacted.

The German Foreign Ministry, meanwhile, said a first German military transport plane has landed in Kabul, but it could only take seven people on board before it had to depart again due to continued chaos at the airport.

A special military flight with some 120 Indian officials separately landed in the western state of Gujarat after taking off from Kabul’s main airport on Tuesday, the Press Trust of India and state TV reported. Another flight made it off the ground Monday as well.

Sweden’s Foreign Minister Ann Linde wrote on Twitter on Tuesday that the staff from the Swedish Embassy in Kabul had returned to Sweden. Japanese diplomats evacuated, and Spain sent military planes to pull people out as well.

Across Afghanistan, the International Committee of the Red Cross said thousands had been wounded in fighting as the Taliban swept across the country in recent days. However, in many places, security forces and politicians handed over their provinces and bases without a fight, likely fearing what would happen when the last American troops withdrew as planned at the end of the month.

A resolute U.S. President Joe Biden on Monday said he stood "squarely behind" his decision to withdraw American forces and acknowledged the "gut-wrenching" images unfolding in Kabul. Biden said he faced a choice between honoring a previously negotiated withdrawal agreement or sending thousands more troops back to begin a third decade of war.

"After 20 years, I’ve learned the hard way that there was never a good time to withdraw U.S. forces," Biden said in a televised address from the White House.

Pentagon officials talked about the plan to get American citizens and allies out of Afghanistan after the Taliban took control.

Talks continued Tuesday between the Taliban and several Afghan government officials, including former President Hamid Karzai and Abdullah Abdullah, who once headed the country’s negotiating council. Discussions focused on how a Taliban-dominated government would operate given the changes in Afghanistan over the last 20 years, rather than just dividing up who controlled what ministries, officials with knowledge of the negotiations said. They spoke on condition of anonymity to discuss confidential details of the talks.

President Ashraf Ghani earlier fled the country amid the Taliban advance and his whereabouts remain unknown.