Teen and mother arrested, father on the run in rapper PnB Rock's murder

Police said the teen was out on parole or probation at the time of the shooting.

LOS ANGELES - Southern California authorities announced a 17-year-old boy, his father, and stepmother were arrested in connection with the brutal killing of rapper PnB Rock that occurred during a robbery in broad daylight at Roscoe’s Chicken & Waffles in South Los Angeles.

Investigators with the Los Angeles Police Department said multiple suspects were wanted in the homicide investigation. They believe that it was the teen who approached the rapper and his girlfriend, demanded their jewelry and proceeded to shoot him several times in front of the rapper’s girlfriend, terrified patrons and staff.

The teen suspect was arrested in Lawndale on a murder charge and his name has not been released. Authorities said he was out on parole or probation at the time of the shooting. He was wearing an ankle monitor that apparently was not being monitored at the time of the deadly shooting.

In addition, the Los Angeles Police Department identified Freddie Lee Trone, the boy's father, as one of the suspects. Trone was on the run but apprehended Thursday in Las Vegas, where he was booked on his warrant pending extradition to Los Angeles.

Law enforcement sources confirm a 17-year-old boy was arrested in connection with the rapper’s killing while his father, identified as Freddie Lee Trone, is on the run.

Shauntel Trone, 32, was arrested in Gardena and was booked for accessory to murder. Shauntel Trone is the boy's stepmother and Freddie Trone's wife.

Investigators believe the family may have been tipped about the rapper's location.

The impromptu memorial grows in South Los Angeles a day after rapper PnB Rock was shot and killed at Roscoe's Chicken and Waffles. 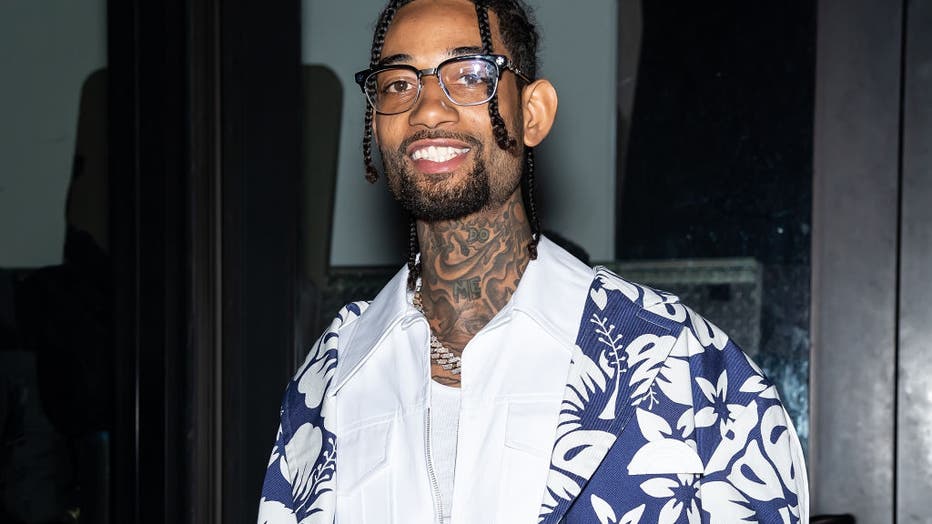 On the afternoon of Sept. 12, Los Angeles authorities said the 30-year-old rapper, born Rakim Allen, was robbed and shot at the treasured restaurant on Manchester Avenue. He was rushed to the hospital where he died.

Following the shooting, the gunman drove off in a getaway vehicle.

Before the robbery, officials said Allen’s girlfriend posted the couple’s location and the rapper also posted a video of himself wearing expensive jewelry. LAPD Chief Michel Moore said they believe the suspect(s) saw the rapper and his girlfriend's whereabouts and tracked them down in the robbery and shooting.

"What we’re not going to do is have victim shaming…they have a right to share their location" community activist Najee Ali said during a news conference earlier this month. "Being murdered in cold blood was the wrong thing to happen."

Louis Perry, a security expert who has worked with celebrities, told FOX 11 that everyone needs to be aware of their surroundings and what they wear.

"Don’t wear the jewelry in any place out the doors right now," he said. "There are a lot of crazy people out there and believe me the crazy people are desperate… they don’t target just rappers, they target anybody with money."

PnB Rock's single "Selfish" topped at 51 on the US Billboard Hot 100 in 2016. His other hits include "Middle Child" featuring late-artist Xxxtentacion and a feature on a Kodak Black song called "Too Many Years."