INTERVIEW: David Chang on "The Next Thing You Eat"

Chef and author David Chang discusses the future of food and how questions about that future have shaped his new Hulu series "The Next Thing You Eat."

CHICAGO - David Chang has a lot of thoughts on vegetarianism and cultivated meat.

"If I had the discipline, I’d probably try to be a vegetarian or something like that," the chef, restauranteur and cookbook author told FOX Television Stations.

"On paper, in theory, it makes more sense, but I have a hard time doing it. I want things to be better, but am I part of the problem? Not the solution? ... It's a conflict."

It’s one conflict among many Chang wrestles with in "The Next Thing You Eat," his latest collaboration with Academy Award-winning filmmaker Morgan Neville. The docuseries, the first season of which is currently streaming in its entirety on Hulu, looks at the future of food — how things are now, how they might be next month or next year and how different (or not) our plates might look in decades to come, thanks to advances and changes in technology, the environment and more.

"Part of this is protein units," Chang elaborated. "[By] 2050, we’re not going to have enough protein for the people on the planet. Okay, what do you do? Do I want to openly engage [with] and love and put cultivated meats on my menu right now? One part of me is yes, the other part of me is no."

"What happens if you can now have a piece of meat that's completely sanitized, literally, of everything? But it tastes exactly like meat. That's a head-scratcher of a question. I don't have the answer for that. It's also, I don't think, a question that anyone's presented to me before. So if I'm thinking about it, maybe someone else will think about it. I think it's worth talking about." 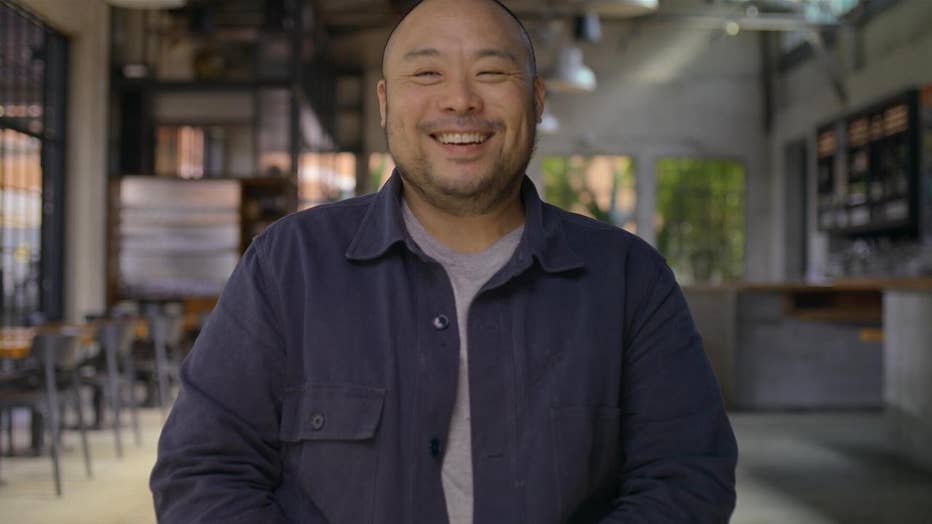 The Next Thing You Eat -- "Delivery: Rise of the Machines" - Episode 101 -- You'll be able to eat anything you want, wherever you are... for a price. Robot pizza. Drone delivery. Technology is coming for the restaurant industry, but what's the cost o

Chang and Neville’s eye-opening docuseries could be summed up with that last sentence — it’s all stuff the pair thinks it’s worth talking about. But while some of the subjects can be unsettling, they’re not out to alarm anyone; ultimately, these are questions of possibility.

"I think mushrooms are going to be the next big thing," Chang told FTS, "and more vegetable matter protein that is going to taste so much like meat, again, that you're not going to know. You're going to have this deluge, really, of new ways to eat meat that are not meat."

All six episodes of "The Next Thing You Eat" are currently streaming on Hulu. For more of Chang’s thoughts on meat alternatives, check out episode two, "Burgers: Balanced Diet."

Investigate your plate with these food shows streaming (for free!) on Tubi

Mary Berry’s Foolproof Cooking (2015): She’s best known stateside as a beloved onetime judge on "The Great British Baking Show," but Mary Berry, "Britain’s best-loved home cook," doesn’t simply do desserts. In this six-episode series, Berry covers everything from dishes to throw together when you’re run ragged to the perfect dishes for a fancy feast. And yes, she’s as charming and kindly here as she ever was in the "Bake-Off" tent. Rated TV-G. Six episodes. Complete series streaming on Tubi.

Iron Chef (1993): It’s iconic for a reason. This is the show that spawned seemingly endless spinoffs, and if you’ve never seen the original, you’re really missing out. Hey, no time like the present to pay a visit to Kitchen Stadium! Rated TV-PG. Three seasons streaming on Tubi.

Tudor Monastery Farm (2013): The Brits sure know how to make a charming food show. This gem sees three historians "go back in time" by about three centuries to experience what life was like for the average bloke in the 16th century. Rated TV-14. Six episodes. Complete series streaming on Tubi.

The French Chef (1963): No discussion of food on TV would be complete without the legendary Julia Child, the trailblazing author and chef whose television series "The French Chef" is still one of the best cooking shows to ever grace the airwaves. If you’ve never had the pleasure, the season 6 standout "The Mayonnaise Show" is a great place to start. Rated TV-G. Seasons 6-10 streaming on Tubi.