Protests erupted across the nation after the U.S. Supreme Court overturned nearly 50 years of legal precedent that afforded women the constitutional right to abortion. In San Francisco, thousands of demonstrators merged and descended upon Civic Center Plaza to voice their opinions and anger at the high-court's repeal of Roe v. Wade.

SAN FRANCISCO - The protest in the city of San Francisco Friday evening against the U.S. Supreme Court's overturning of Roe v. Wade began at the Phillip Burton Federal Building and ended at the Ferry Building after speeches, chants, marching and a 49-minute sit-in on Market Street that represented the 49 years Roe v. Wade was law in the United States.

The protest was organized by the National Mobilization for Reproductive Justice along with a coalition of other organizations including The Raging Grannies Action League, Rise Up 4 Abortion Rights and Freedom Socialist Party. 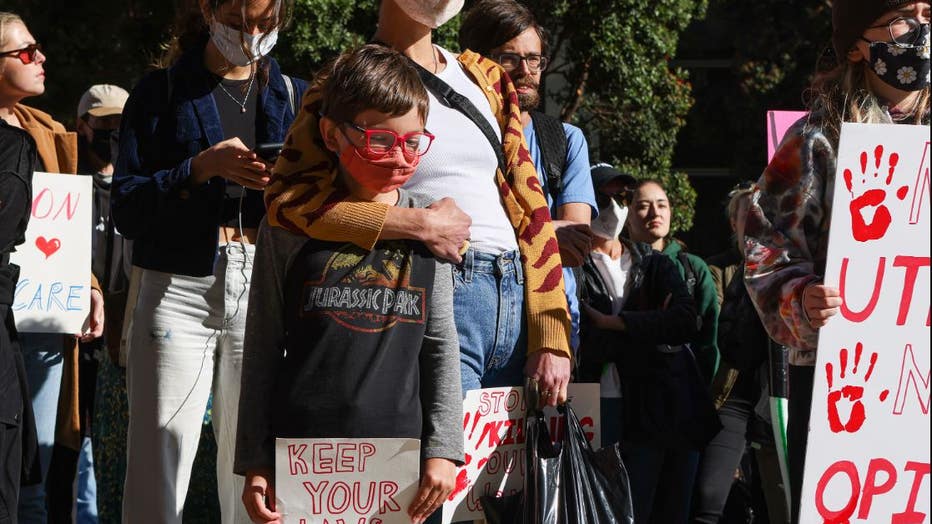 Farris hugs her son Micky Burmeister, 10, during a protest in defense of abortion in San Francisco, Calif., on June 24, 2022. SCOTUS announced the overturn of Roe vs Wade earlier in the day. (Harika Maddala/ Bay City News / Catchlight Local)

The rally began at 5 p.m. at the federal courthouse with a small crowd, but soon expanded to more than 1,000 people listening to speeches lambasting the Supreme Court justices and warning against the consequences of their decision.

Protestors who sat blocking the intersection of Market and 8th said they were prepared to risk arrest by police.

"We cannot stop at fighting for abortion. We have to fight for all of us," said Christina Lee, of the National Mobilization for Reproductive Justice. "So women, queer folks, trans folks, straight folks, we all must come together. Citizens, immigrants. We all have to come together and fight for us, because if we do not stand together, they will pick us off, one by one."

MORE: State by state: Where abortion will be illegal after Supreme Court Dobbs v. Jackson ruling

Protesters in San Francisco say they were prepared to risk arrest on Friday after the U.S. Supreme Court decision to overturn Roe v. Wade. Pro-abortion rights demonstrators gathered at the Ferry Building, the Federal Building and some even sat blocking a busy Civic Center intersection. 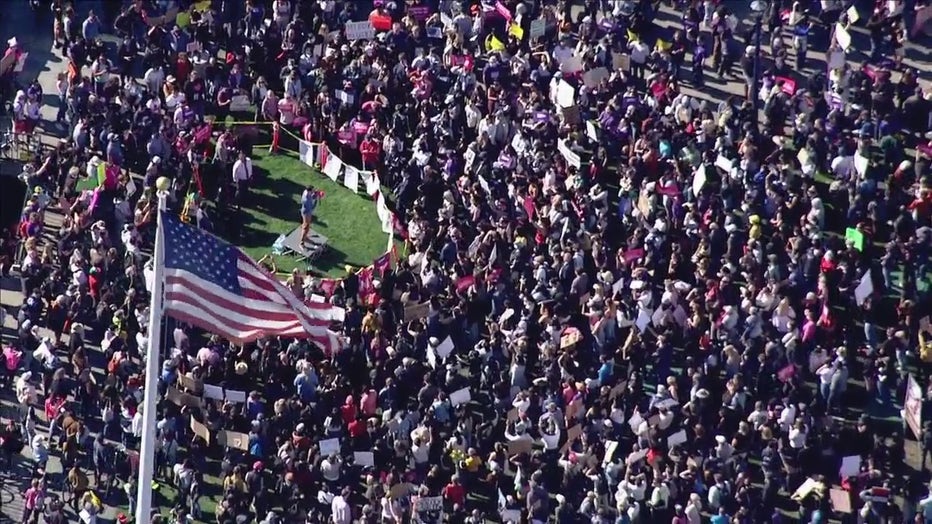 "We're not letting this right go without a fight," said Lee. "They're not just coming for abortion. They're also coming for our birth control, interracial marriage, same-sex marriage."

Many speeches blamed not only Republicans, but also Democrats for the stripping away of reproductive rights.

"So far, Biden and the Democrats have not enshrined Roe in law, ended the filibuster, or done much about this but fundraise for November. They have had fifty years to take action, and we are done waiting," said Sarah, from Socialist Alternative. "The protest today is not just to blow off steam. This needs to be the start of a movement to bring back abortion rights." 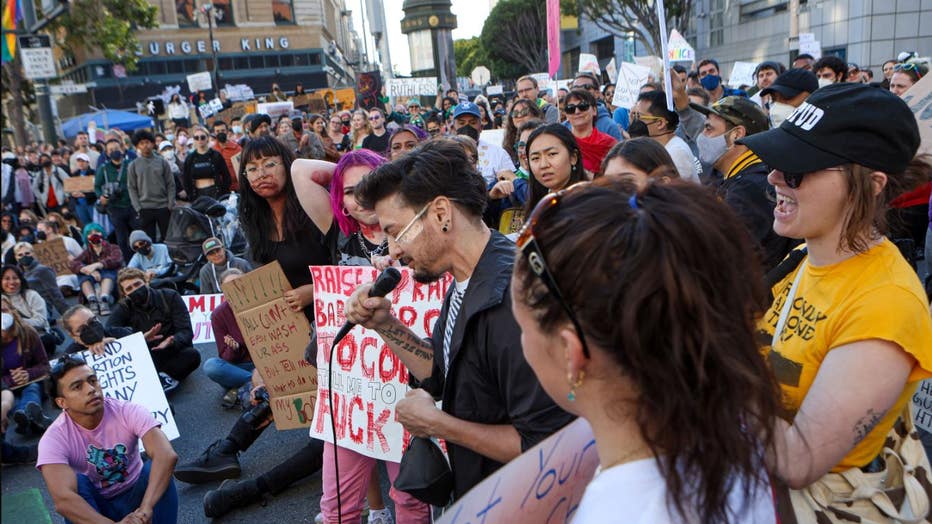 Ali Woolwich, of San Francisco, speaks during a protest in defense of abortion in San Francisco, Calif., on June 24, 2022. SCOTUS announced the overturn of Roe vs Wade earlier in the day. (Harika Maddala/ Bay City News / Catchlight Local)

This act of civil disobedience did not end in arrests. Many had attended the earlier rallies held at other locations. They were driven by passion and apprehension.

"This decision is devastating. I'm sorry. I have two daughters. I just can't imagine what this means for their futures and it's really terrifying and devastating," said Danielle Love, and abortion rights supporter.

Protestors said even though the leaked draft from the high court indicated this may be coming -there is still a sense of shock.

"It hurts. It feels like a betrayal...overwhelming sense of despair and like, you feel it in your body. It's like...it's real," said Love.

Some said they saw protests on the street supporting abortion rights and joined spontaneously.

A group of doctors from Zuckerburg San Francisco General Hospital said they're fighting to make sure all women have access to care and choice.

"We're all abortion providers. This is very important to our training and our belief that health care should be accessible and abortion is health care, so it's important for us to be here to stand up for our patients particularly those who are marginalized," said Dr. Cazandra Zaragoza.

"I don't know about you, but I am pissed off," Mahogany told the crowd. "We will not stand for it. But, we do not have the time to grieve. Today, it is abortion, but we already know, Justice Thomas already told us, our right to privacy is under attack, and it doesn't stop at abortion access."