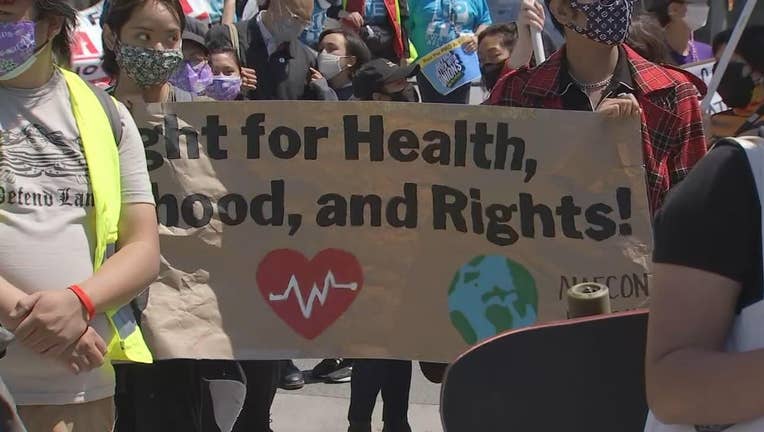 OAKLAND, Calif. - Thousands of people turned out to celebrate May Day at events this afternoon on both sides of the Bay Bridge.

May 1 is a day to honor labor and the labor movement. International Workers’ Day, as it’s known worldwide, dates back to 1889, following a deadly demonstration three years earlier in Chicago.

At the time, workers striked in support of an eight-hour work day. It’s known as the Haymarket Affair.

Today, workers around the globe get together to celebrate the labor movement.

In San Francisco, more than a thousand people re-created a famous 1934 May Day march from the Embarcadero to Civic Center in front of City Hall.

The large crowd was filled with people from labor unions, labor councils, and workers themselves.

"I think what we know is that showing up for each other, the solidarity shows just how strong we are," said Meghann Adams, a union member.

The labor movement has a close bond with the civil rights movement, and iconic activists Angela Davis who’s been outspoken on both issues was one of several speakers.

"There is no place I would rather be on May 1, 2021 than with you here, standing up for the rights of workers," said Davis.

"One of the reasons I’m here is to learn more about the proposition that will allow people to organize that are not members of unions, said Spanky Woods, a taxicab driver.

Davis is referring to The Protecting the Right to Organize Act, a comprehensive piece of labor legislation known as the PRO ACT.

The President supports it, it’s passed through the House, and is currently in the Senate.

"The PRO ACT would level the playing field for workers in corporations. Right now, corporations do everything with impunity, said Tefere Gebre, Executive Vice President of the AFL-CIO.

In addition to making it easier for gig workers to organize, the legislation also imposes stricter penalties on employers trying to block workers' attempts to unionize.

"Regularly companies intimidate, fire, and they do all kinds of things to scare workers from actually voting for a union, Gebre said.

In Oakland, another gathering, this time caravan style.

Though fewer than 11% of Americans belong to unions as membership has declined over decades, a Gallop poll shows Americans approval of unions has climbed to 65%.

The trend shows, as social and economic inequalities rise, so does support for unions.

"The way that we’re going to get any kind of change at all, if we want any kind of a hopeful future, and a future for the planet, is if we stand together," said Rachel Jackson with People’s Strike Bay Area.

After passing the House, it was referred to a Senate Committee last month.