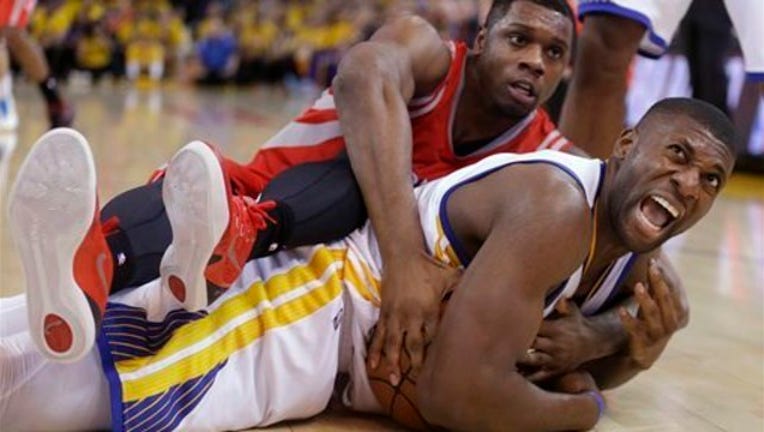 SAN FRANCISCO (KTVU) – The cross-bay tug-of-war over the future of the Golden State Warriors continued to heat up Monday.

The Warriors, who are set to take on the Cleveland Cavaliers in the NBA Finals Thursday, have announced plans to build a new arena near AT&T Park and relocate there for the 2018 basketball season.

The plans have ignited a push-pull among fans across the Bay Area. When star guard Stephen Curry attended a Giants game recently and his running mate Klay Thompson took in an Oakland Athletics contest, sports talk radio erupted into an at times heated debate.

When asked about the debate on Monday, San Francisco Mayor Ed Lee's face lit up in a smile.

Last week, Oakland Mayor Libby Schaaf told reporters that Lee had told her that if the Warriors were to win the NBA title, he would not stage a victory parade and allow Oakland to bask in the limelight.

On Monday, as Lee filed for reelection, he didn't seem as committed.

"First of all, I'm a big fan of the Warriors," he said. "I'm going to make as many games as I can and cheer on the Warriors. I think we have a huge fan base for the Warriors in San Francisco as well as in the Bay Area. They are the Bay Area's Golden State Warriors."

When asked about the parade specifically, Lee said he didn't want to jinx the team.

"I've done this three times with the Giants," said Lee of San Francisco's experience with victory parades. "I'm not going to jinx them (by talking about parade plans). We're not talking about plans today. We're talking about cheer and admiration. "

But he left little doubt about the city's plans beyond a victory parade.

"We are committed and we will build the Warriors arena," Lee said.

The San Francisco mayor also had stern words for the opponents within the city to the new 18,000-seat arena.