OAKLAND, Calif. - After a dry Saturday, the Bay Area is in store for much needed rainfall over the next few days.

Highs Saturday will be in the mid 50s. Winds will shift west in the afternoon and will climb to 10 to 20 mph.

Saturday night will be clear before becoming partly cloudy. Lows will be in the mid 40s. West winds will be 5 to 15 mph.

DOWNLOAD THE FOX 2 WEATHER APP FOR iOS and ANDROID

Showers will be likely begin Sunday morning, with heavier rain coming in the afternoon. Highs will be in the lower 50s. West winds will be 10 to 20 mph.

Orozco says we can expect a significant amount of rain on Tuesday and Wednesday as an atmospheric river moves in.

Portions of the Bay Area will receive 2 to 4 inches of rain during this storm, which is likely to cause flooding in certain areas.

With this second storm, landslides are a major risk, particularly for several areas around the region that burned during the 2020 wildfire season.

People will also want to bundle up, as temperatures will be cold. Lows could be in the 20s.

As a result of the frigid temps, snowfall levels will fall drastically. This likely will lead to snow accumulations atop Bay Area peaks. 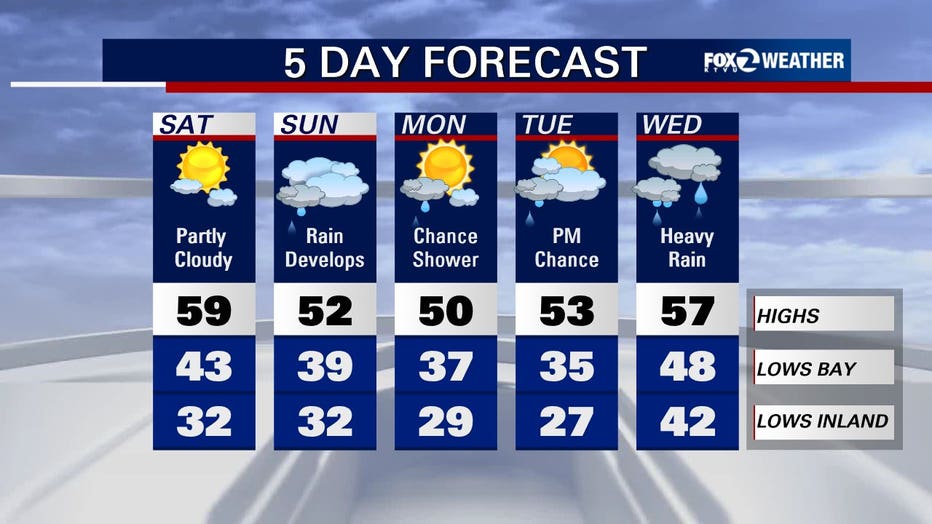