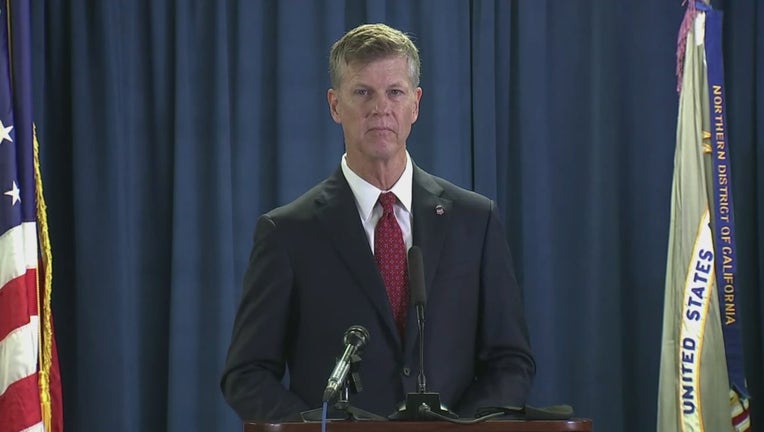 David L. Anderson, U.S. Attorney for the Northern District of California at a press conference on Thursday, Feb. 11, 2021.

SAN FRANCISCO - David L. Anderson, U.S. Attorney for the Northern District of California, announced Thursday that he will step down from his post on Feb. 27 as a result of the change in administration in Washington.

Anderson explained that "the call went out, as it often does at this time, in the changeover of administration for all presidentially-appointed, Senate-confirmed, U.S. attorneys to step down at this time. And I'm in that grouping."

Anderson made the announcement as an aside at a news conference he called to announce multiple drug-trafficking indictments and what he described as a "breathtaking" seizure of methamphetamines and other illegal drugs.

Anderson was appointed to the post by President Donald Trump in August 2018 and confirmed by the U.S. Senate on Jan. 2, 2019.

There are 93 U.S. Attorneys throughout the 50 states and territories. U.S. Attorneys are appointed by, and serve at the pleasure of, the president. Their appointments are subject to confirmation by the Senate.

The Northern District of California includes 15 counties, the cities San Francisco, Oakland, and San Jose, and is home to roughly 9 million people.

As U.S. Attorney, Anderson reported to the U.S. Attorney General. For most of Anderson's tenure, that was William Barr. President Biden has nominated Merrick Garland for the post.

Anderson is from San Jose. According to his Justice Department biography, he graduated from San Jose State University in 1985 and Stanford Law School in 1990.

He served as a judicial law clerk first to Chief Judge Clifford Wallace of the U.S. Court of Appeals for the 9th Circuit and then for Justice Anthony M. Kennedy of the U.S. Supreme Court.

Anderson was a partner in the national law firm Sidley Austin LLP, where he handled a wide range of commercial litigation matters, before he became the U.S. Attorney.

At Thursday's news conference, Anderson declined to answer a question about what he plans to next, saying, with a laugh, the Department of Justice "actually gets a little jumpy about using this platform to promote my private interests, so I won't speak about next steps."