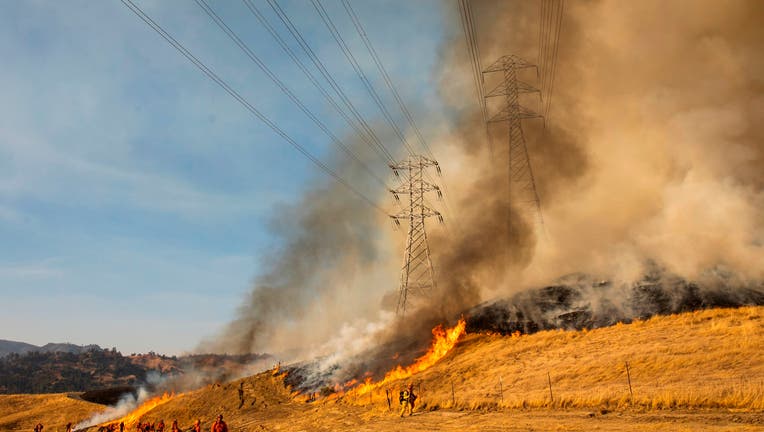 A back fire set by fire fighters burns a hillside near PG&amp;E power lines during firefighting operations to battle the Kincade Fire in Healdsburg, California on October 26, 2019. - US officials on October 26 ordered about 50,000 people to evacu

SPOKANE, Wash. - A Washington state utility said it has no plans to shut off power to prevent wildfires this summer after a blaze that destroyed more than 100 homes last year was sparked when a tree fell onto one of the utility's power lines.

Some electric companies including Pacific Gas & Electric in California have temporarily cut power to parts of their service areas during wind storms in recent years in a bid to prevent fires.

But Avista Utilities representative Dave James recently told state officials that preemptively shutting down power was not an option for the the utility at this point, although it could shut down power to help an agency if its fighting a fire near an Avista power line or pole, The Spokesman-Review reported.

During last year’s Labor Day fires, a tree fell into Avista power lines and ignited the brush underneath. Strong winds pushed the fire to Malden, Washingon, where it destroyed about 120 homes, eight commercial buildings and 94 other structures.

Dry conditions this year already have led to 410 fires across the state, according to the Department of Natural Resources. The previous 10-year average was 158 fires at this point in the year.