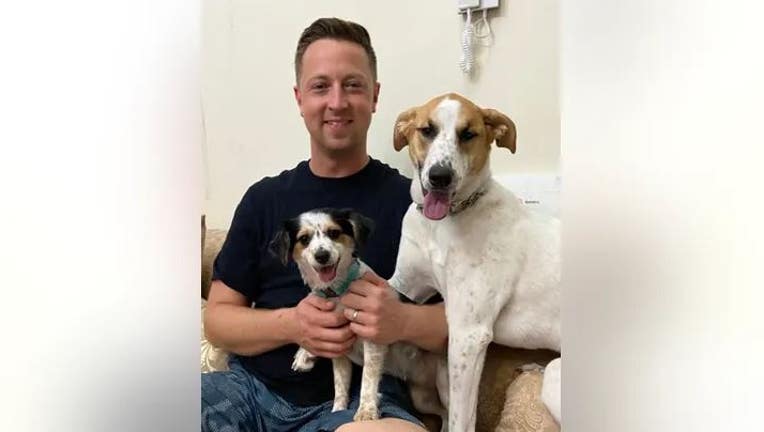 Two helpless dogs in the Middle East faced terrible abuse and almost-certain death until two U.S. Navy sailors not only rescued them — but found a way to get them out of there and on toward a safer, healthier and far happier life.

Married U.S. Navy duo Chief Petty Officer Matt Johnson and veteran Coreen Johnson first made the decision to take in the two needy pups, Ruby and Sunny, while the couple were deployed to the Middle East.

However, the news that they would be transferred to Japan threatened the family of four's ability to stick together — and Coreen expressed her intense worry about it in an interview with Fox News Digital.

US SOLDIER IS TRYING TO RESCUE THIS SWEET, HELPLESS PUPPY FROM THE MIDDLE EAST

"We were just kind of left not knowing what to do," she said.

With limited resources within the military to transport the two animals to the couple's next duty stations, the Johnsons reached out to the Long Island, New York-based nonprofit Paws of War for "immediate" help.

"I didn't know what to do because we had to leave, and I could not live without them," she said.

"We don't have children of our own," she added. "These dogs are our family — and Paws of War totally understood that."

The New York-based Paws of War, headed by co-founder Robert Misseri, has brought over 300 dogs and cats — all rescued by American troops overseas — to safety in the U.S. since 2014, according to its website.

Familiar with the immense challenges of getting rescue animals out of the Middle East, Paws of War was able to locate a flight to Japan for the dogs — and it all happened just this past Sunday. 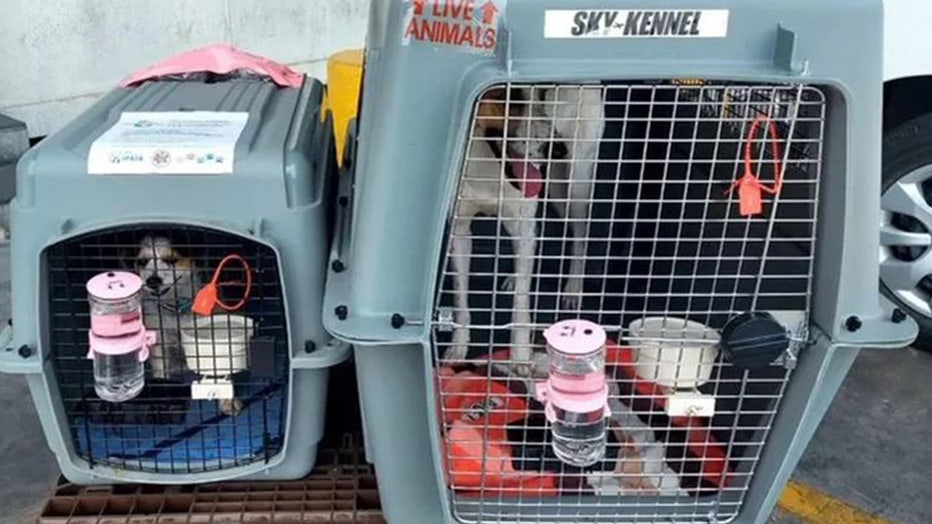 Ruby (left) and Sunny, the two dogs that Matt and Coreen Johnson rescued in the Middle East during deployment, finally landed in Japan, courtesy of the New York-based nonprofit Paws of War. They're shown here in their travel cages.  (Paws of War)

Now that the sailors and dogs are officially reunited, Coreen shared her bliss at having the family of four back together.

Coreen added with a laugh that even though their new home is not furnished yet, Ruby and Sunny are all they need.

"We don't need our stuff," she said. "We're just happy to have them with us." 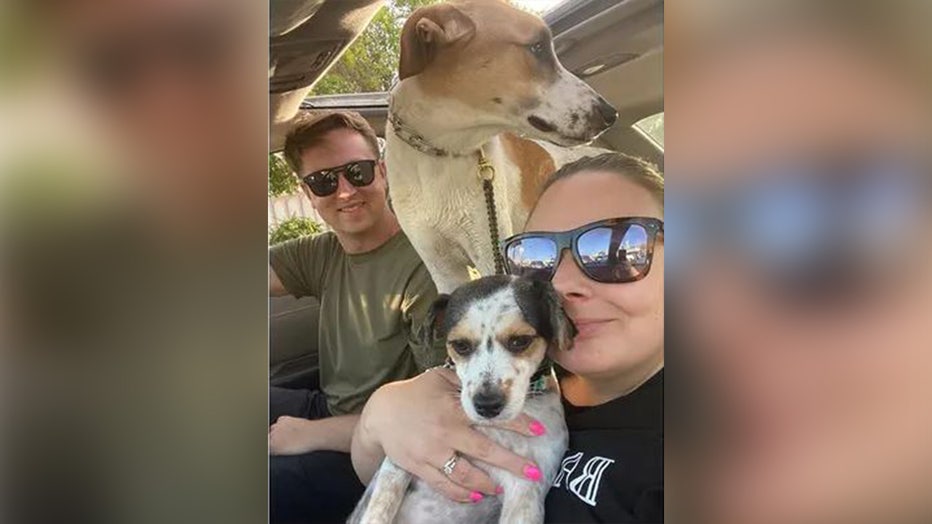 Chief Johnson agreed that reuniting with the dogs restores a sense of "purpose" in their lives.

"The dogs are our family," he said. "It brings back purpose to the family."

The Johnsons first connected with each other because of their mutual love of animals.

They met for the first time in the barracks when they were stationed in Norfolk, Virginia. Matt was on a walk with his dog at the time — and Coreen stopped to pet the animal.

"I was really homesick," she said. "All I wanted to do was pet his dog."

(That dog of Matt's has since passed away.)

Meanwhile, Navy veteran Coreen, who left the service in 2013, explained that her passion for animals motivated her to help with the animal population in the Middle East. That, in turn, is what led to the couple's rescue of Ruby and Sunny.

Safe and at peace at last, Ruby and Sunny snuggle together on a bed. (Paws of War)

"I fell in love with these two dogs," said Coreen, "and we absolutely had to take them with us."

Bait for a dogfighting ring

The Johnsons first came across little Ruby, who was being held as bait for a dogfighting ring.

The small Jack Russell terrier mix happened to stick her nose through a hole in the metal fence where she was confined — and the Johnsons noticed her. 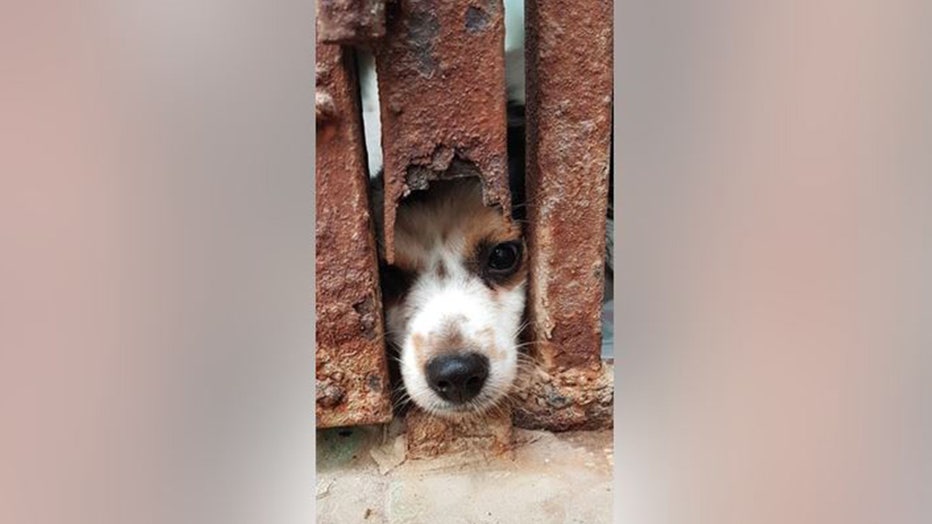 Little Ruby, a Jack Russell terrier, is shown sticking her nose through a metal fence at a dogfighting ring in the Middle East. (Paws of War)

The Johnsons negotiated with the owners to take Ruby out of harm’s way for $10.

She found the injured and severely abused dog lying on the side of the road.

Misseri of Paws of War revealed to Fox News Digital that a group of kids attempted to light Sunny on fire. 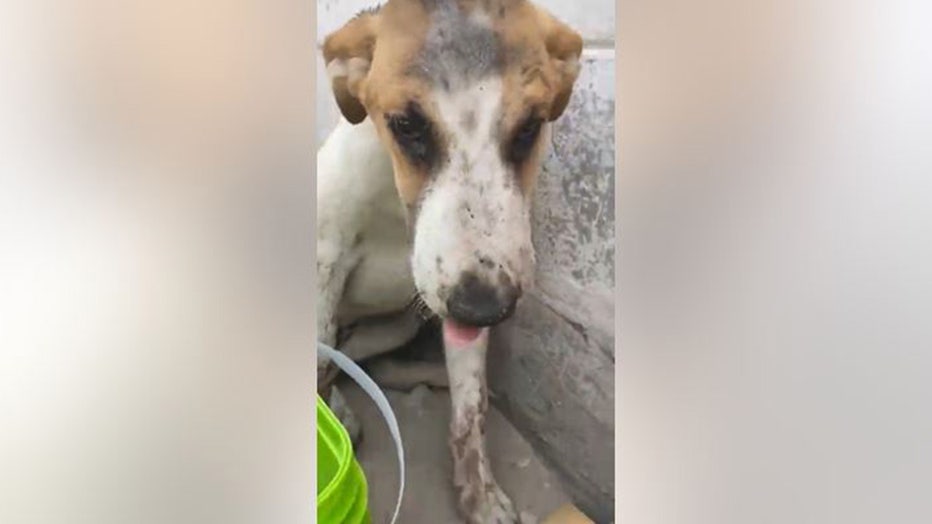 This is how poor Sunny was found in the Middle East — abused and badly injured. "We had to save him," said Coreen Johnson.  (Paws of War)

"He had burns on his body. He was hit by a car. His skull was fractured," Coreen said.

Coreen shared that Sunny — whom she considers a "horse dog" based on his large stature — got his name because of his positive disposition, despite the rough times he clearly endured.

"He’s just so friendly and kind," she said.

Misseri said that Paws of War’s current goal is to provide both Ruby and Sunny with medical insurance for life.

A main mission of Paws of War is its "war-torn pups and cats" program. It helps U.S. service members who have saved an animal while serving overseas bring those animals to safety in the U.S.

In addition, says Paws of War, it works to "rescue, train and place shelter dogs to serve and provide independence to our veterans and first responders [who] suffer from traumatic effects sustained while serving their country and community. We provide essential and supportive services to our heroes in need."

Any donations are gratefully accepted at pawsofwar.networkforgood.com.