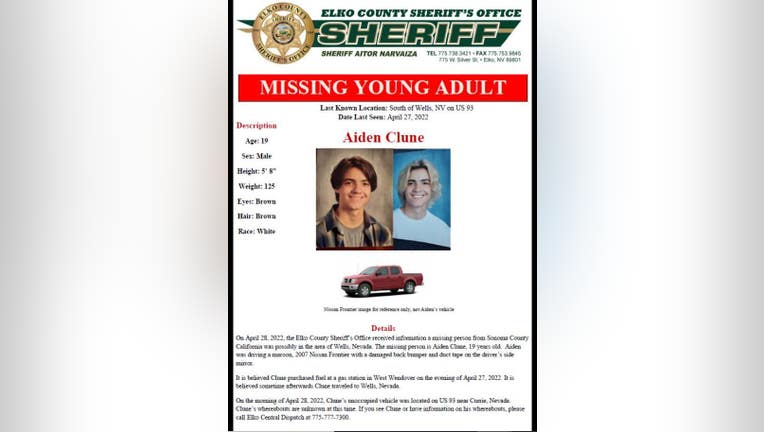 SONOMA, Calif. - A candlelight vigil is being held at Sonoma Square Friday night, for 19-year-old Aidan Clune, who has been missing since late April.

Clune was last seen in Elko County, and may have been in the area of Wells, Nevada.

According to the Elko County Sheriff’s Office, Clune abandoned his car on the side of U.S. 93 near Currie, and then traveled on foot through the wilderness. His 2007 Nissan Frontier was found the morning of April 28th, and Clune’s tracks were seen in the dirt headed toward the hills. An aerial search tracked his footprints for 10 miles.

Search and rescue teams have been scouring the area. They have been assisted by multiple agencies, volunteers, search dogs, and the Civil Air Patrol’s Nevada and Utah wings.

A candlelight vigil was held at Sonoma Square Friday night, for 19-year-old Aidan Clune, who has been missing since late April.

Friends and family members are expected at the vigil, to pray for his safe return.

Clune is 5’8", 125 pounds, has brown hair and brown eyes. He was last seen wearing dark clothing.