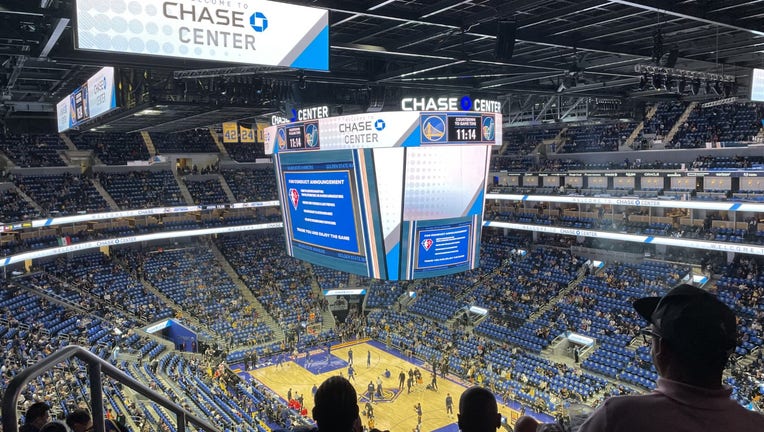 SAN FRANCISCO - The Warriors will host their first-ever playoff game at Chase Center this Saturday, when Golden State faces the Denver Nuggets for Game 1 of the first round of the 2022 NBA Playoffs.

It’s the first time the Warriors have made the playoffs since the team moved across the Bay to the $1.4 billion arena, which opened in September 2019 at its Mission Bay location.

SEE ALSO: Steph Curry's foot injury will keep him out for rest of regular season

The team finished the 2021-22 regular season with a 53-29 record, placing them in third place in the Western Conference.

The Warriors have announced upcoming events to mark the first postseason run at Chase, with Friday designated as "Blue and Gold Day" in the Bay Area.

As part of that celebration, the Warriors flag will fly at the city halls of San Francisco, Oakland, and San Jose. In addition, landmarks around the Bay Area including San Francisco’s Coit Tower will be awash in Warriors blue lighting.

The Mayors of the three cities also planned to show their Warriors pride by wearing their blue and gold as they rallied fans to join them in the team spirit.

"There is no better place to be during playoff basketball than the Bay Area," said San Francisco Mayor London Breed. "I can’t wait to put on my Warriors gear next week and ask all San Franciscans to join me as our Dubs make another NBA title run."

Oakland Mayor Libby Schaaf said, "The Town is ready to put their pride on full display and remind the world that we are the best fans in the NBA."

San Jose’s Mayor also called on residents to join in Warriors fever. "I encourage #DubNation fans across the city to show their love for the Bay Area's team and tip off the playoffs by checking out City Hall on Friday as we raise the Warriors flag and light up the Rotunda in blue and gold. Go Dubs!" Sam Liccardo said.

Game 2, of which the date and time was still to be determined, will also be at Chase. And then the series was set to move to Denver for Games 3 and 4. If needed, Games 5 and 7 of the best of four series were scheduled to be back at Chase.

At the time of publication, a check of ticket prices for Saturday’s Game 1 ranged from $139 each for upper level seats to $9,500 for a coveted courtside view.

For those looking to buy playoff tickets, the Warriors advised fans should avoid non-verified third-party vendors when purchasing single-game tickets. "The team experienced issues with fraudulent tickets again this season, with over 300 fans denied access during the regular season due to counterfeit tickets," Warriors officials warned.

They strongly encouraged fans to purchase tickets directly from the Warriors website or by calling 1-888-GSW-HOOP.

And in the spirit of the team's "Strength in Numbers" slogan, the Warriors were offering Dub Nation an opportunity to come together and cheer on their team during the away games, with plans to host Playoffs Watch Parties in the plaza outside the Chase Center, known as Thrive City. The free viewing parties will be open to the public and include live entertainment, a beer garden, photo opportunities, a kid zone, and other activities to get fans pumped.