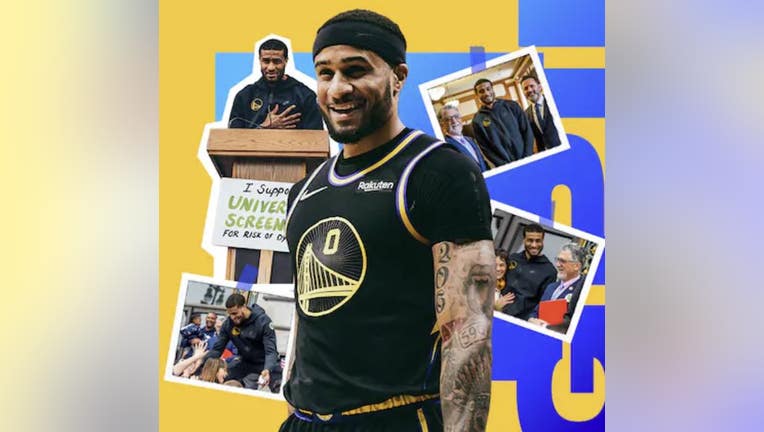 SAN FRANCISCO - The Warriors have had a lot to cheer about lately as the Western Conference champs. But on Tuesday, the cheers from the team’s practice facility at Chase Center in San Francisco had nothing to do with the upcoming Finals games but a celebration of one of their own for his devotion and dedication to his community.

The Warriors shared video of the emotional and jubilant announcement. Jayden, a young Pittsburg resident and representative from the group Decoding Dyslexia, was the lucky messenger who got to deliver the news.

He held court as Payton and his teammates listened: "Thank you for being a good role model for kids with dyslexia," Jayden said. "And also, I have a surprise for you. The NBA [Community] Assist Award-- You won it."

Cheers erupted as Payton’s teammates piled on him with excitement, jumping around and waving arms in the air in celebration.

Kicking off his press conference on Tuesday, Coach Steve Kerr acknowledged Payton, his new award, and the work he’s done with children with dyslexia, which he said the player himself struggled with in his youth.

"We’re all thrilled for Gary," Kerr said, adding, "It's really amazing stuff and we're incredibly proud of Gary and everything he's done, obviously on the court but in the community as well. So it's beautiful, beautiful stuff."

In a press release announcing the award, the league’s community involvement program, NBA Cares said, "Payton II has prioritized engaging with and giving back to his community, particularly through initiatives related to youth with learning disabilities and those dealing with hardship."

He was credited for founding his GPII Foundation this season, a non-profit that works to promote Dyslexia-awareness. "Payton’s own personal struggle with dyslexia, and his passion and efforts to uplift young people impacted, led to the Warriors expanding their Read to Achieve program to specifically include students with learning disabilities," NBA Cares said.

The league also noted Payton’s efforts that prompted the Warriors to expand their literacy Read to Achieve program to specifically include students with learning disabilities.

The 29-year-old player has also been actively involved in calling for universal dyslexia screening in California and has been an outspoken supporter of Senate Bill 237 a dyslexia risk screening bill making its way through the California legislature.

In a moving letter published in The Athletic on Tuesday, Payton's mother celebrated her son, the challenges he’s overcome, and all that's led to his path of success.

"Let me tell you, my son: I love the player you have become. I love your story of overcoming and how you had to take the long path to the league. You know the hardcore Oakland girl in me loves that her baby was able to handle the grind and come out shining," Monique Payton wrote.

The proud mother lauded her son for his game which she called "worthy and electric and unique." She went on to say, "But nothing, nothing, makes me prouder, happier, more full than how good of a person you are and how you share your goodness with the world."

She looked back on the day her son was first diagnosed with dyslexia and noted how far he'd come.

"Just like your career, you had to endure before you could harvest the fruit. Remember when I told you how, when you were ready to share your learning disability with the world, you would have an incredible platform to help people? Look at you now," Monique Payton said to her son, "You will do even more great work. You will impact people’s lives in a meaningful way. Your career is only going up from here, and so will the hope and inspiration you bring to the world."

Payton II joined Stephen Curry who won the community service award for the 2013-14 season and then Warrior Kevin Durant, the recipient during the 2017-18 season.

Payton’s recognition made Golden State now the only team that has had three players receive the award since its inception in 2014, according to the Warriors.

As part of the honor, Payton’s GPII Foundation will receive a $75,000 contribution from the NBA and Kaiser Permanente.

The recognition may have been even that much more sweet for Payton who has been sidelined from a crushing injury sustained during Game 2 of the Western Conference semifinals against the Memphis Grizzlies on May 3, when he fractured his left, shooting elbow.

The Warriors were hopeful he’d return in time to play in the Finals against the Boston Celtics. He’s reported to be improving and could be back on the court with his team as early as a Game 1 on Thursday.