MariMed, Inc. unveiled what they proclaimed is the world’s largest pot brownie on Tuesday to celebrate National Brownie Day (Dec. 8) and the launch of the company’s new brand, Bubby’s Baked.

MariMed is a "premier seed-to-consumer vertically integrated multi-state operator" and advises people who plan to produce cannabis on design, development, operations, and financing, according to the company’s website.

The company created a giant version of one of its smaller pot brownies and used all the typical ingredients such as flour, butter, eggs, sugar — along with 20,000 mg. of THC, according to a company news release.

"The confection measures 3 feet wide by 3 feet long and 15 inches tall, weighs a whopping 850 pounds," according to MariMed.

"Bubby’s Baked fills a big hole in the edibles market that cannabis consumers crave – high-quality, delicious baked goods that stay moist and chewy," said MariMed Chief Product Officer and SVP/Sales Ryan Crandall. "For many of us, homemade brownies were our first taste of cannabis-infused edibles." 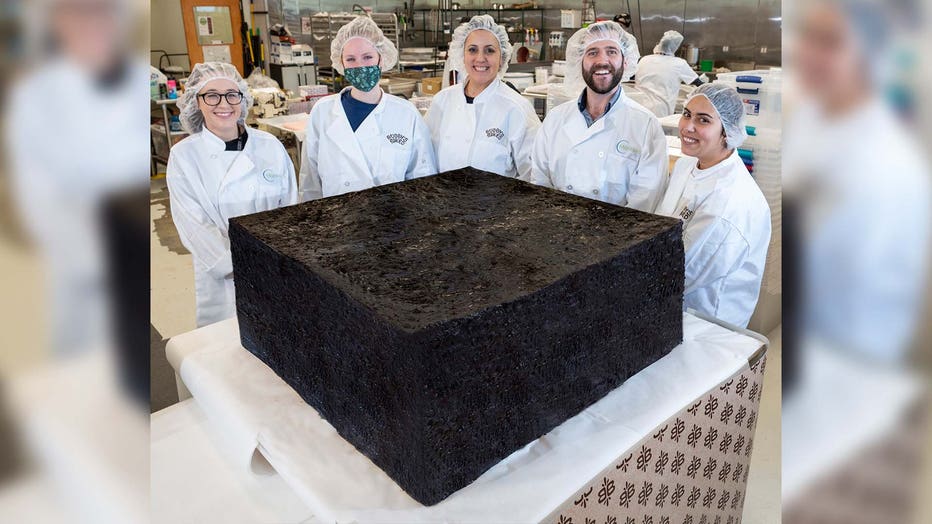 "Bubby’s recreates and elevates that nostalgic experience, infusing full-spectrum, craft-quality cannabis into timeless recipes, for a reliable high reminiscent of simpler times. Strategically, Bubby’s is part of our effort at MariMed to build a house of brands that meets different consumer needs across a diverse range of occasions," the news release continued.

The mass-produced pot brownies from Bubby’s will only be available at dispensaries in Delaware and Maryland starting in 2022, according to MariMed.

In both Maryland and Delaware, medical use of marijuana is permitted and possession of less than an ounce of weed will incur a fine but no jail time. Recreational use of weed in both states is still illegal, according to Norml.org.

Marijuana has become broadly accepted around the United States, with a Gallup Poll last year showing 68% of Americans favored legalization. South Dakota was among four states that month to approve recreational marijuana, along with New Jersey, Arizona and Montana. Fifteen states and the District of Columbia have also done so.

Advocates’ next goal is to get marijuana removed from a federal list of illegal drugs with no accepted medical use and high potential for abuse. The listing prevents labs from researching potential medical remedies using marijuana.

Earlier this year, Senate Majority Leader Chuck Schumer backed a bill that would strike down a longstanding federal prohibition on marijuana, embracing a proposal that has slim chance of becoming law yet demonstrates growing public support for decriminalizing the drug.

Proposals to legalize marijuana are nothing new. But Schumer is a sponsor of the effort unveiled in July, underscoring how a once-fringe idea is increasingly mainstream. The measure would erode a central pillar of the decades-long war on drugs, which has disproportionately affected communities of color in the U.S.

"I will use my clout as majority leader to make this a priority in the Senate," said Schumer, of New York, who is the first Senate leader to support such an effort. "It’s not just an idea whose time has come, it’s long overdue."