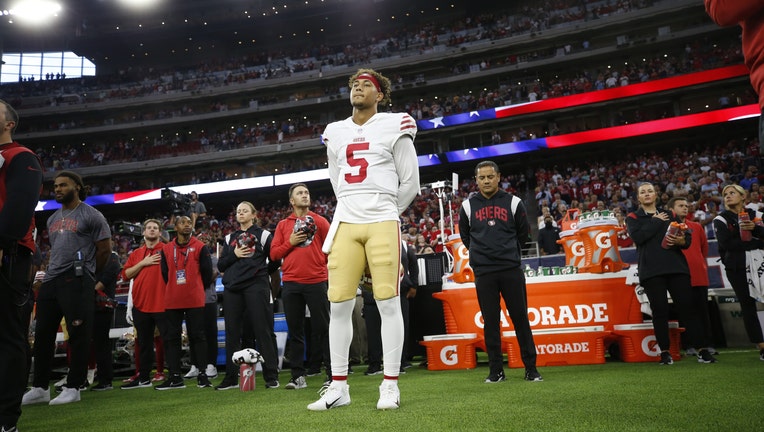 HOUSTON, TX - AUGUST 25: Trey Lance #5 of the San Francisco 49ers on the sideline before the game against the Houston Texans at NRG Stadium on August 25, 2022 in Minneapolis, Texas. The Texans defeated the 49ers 17-7. (Photo by Michael Zagaris/San Fr

San Francisco 49ers first year starting quarterback Trey Lance was not selected as one of the team's captains, raising some eyebrows on social media on Wednesday.

Head coach Kyle Shanahan said the team's six captains are voted on by the rest of the team and said Lance came in seventh place.

Shanahan said at the end of the day, he has the final say and could have changed the team's decision.

"I could cheat if I wanted to, but I didn't at all, I agreed with all of their choices," said Shanahan. "I respect our captains so does the rest of the team, they voted on them, but that's not everything to me."

Shanahan said there are plenty of guys who are not captains, but are treated no differently in the locker room.

Lance said becoming a captain in the future is a goal of his and added that he voted for all six of the players selected.

"Every single one of them deserves it," said Lance. "Those guys have all proved it and that's what this league is about."