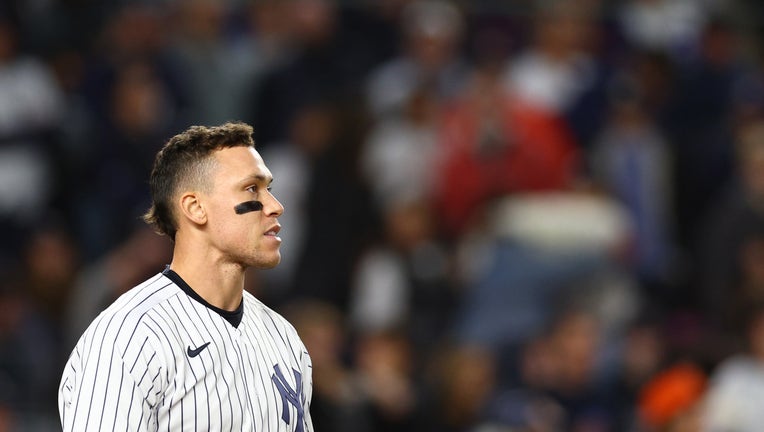 NEW YORK, NEW YORK - OCTOBER 23: Aaron Judge #99 of the New York Yankees looks on during the sixth inning against the Houston Astros in game four of the American League Championship Series at Yankee Stadium on October 23, 2022 in the Bronx borough of

MLB fans are on the edge of their seats awaiting what team Aaron Judge will choose as the league’s top free agent.

The New York Yankees are considered the favorites despite the San Francisco Giants coming in with a massive deal worth $360 million, according to The New York Post. While the years are unknown, the Yankees' latest reported offer was "in the neighborhood" of $300 million, per ESPN.

Prior to this free agent surge, Judge played this past 2022 campaign knowing that he would be in this situation after the season. The Yankees tried to sign him before Opening Day, but both sides couldn’t reach a deal.

Judge wasn’t a fan that those negotiations, including the dollar amount of the proposed extension, was leaked by the Yankees.

"We kind of said, ‘Hey, let’s keep this between us," Judge told TIME after being named Athlete of the Year by the magazine. "I was a little upset that the numbers came out. I understand it’s a negotiation tactic. Put pressure on me. Turn the fans against me, turn the media on me. That part of it I didn’t like."

News broke prior to Opening Day that Judge turned down a $213.5 million extension, which led to betting on himself in 2022 to generate a more lucrative pact. He went on to win the 2022 AL MVP Award while resetting the single-season home run record in the American League, breaking Yankees legend Roger Maris’s record of 61 homers with his own 62.

With Brian Cashman remaining as the team’s GM after the team announced his four-year extension on Monday, Judge’s words about the leaking of the deal makes New York’s pursuit of their potential next captain interesting. Could that leak of information factor into Judge going elsewhere?

Judge also said in the TIME article that his wife, Samantha Bracksieck, reminded him of a prediction he made in 2010.

"I said, in 10 years, I’ll be married to Sam and playing for the San Francisco Giants," Judge said. "I was like, that’d better not get out."

Well, now it’s out, and he’s already done one of those things. The Giants are hoping that prediction comes to fruition.

Cashman noted at the MLB Winter Meetings in San Diego on Monday that the Yankees have submitted multiple offers to Judge’s camp for review, but he is unsure where things stand with where Judge ultimately wants to go.

A recent report said that he would be making a decision soon, and that Judge would attend the Winter Meetings at some point — that was unbeknownst to the Yankees, though.

With players like Trea Turner (11 years, $300 million) getting their bag of money already, Judge is surely going to cash in. At this rate, it’s just a matter of who he decides and how quickly that decision will be made.