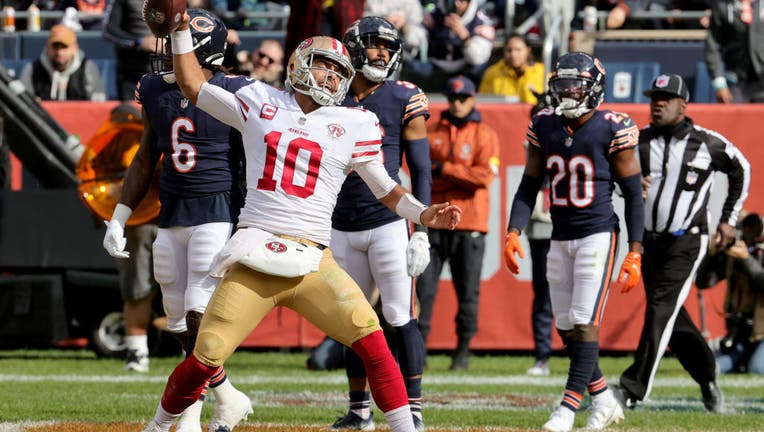 CHICAGO, ILLINOIS - OCTOBER 31: Jimmy Garoppolo #10 of the San Francisco 49ers celebrates after scoring a touchdown in the fourth quarter against the Chicago Bears at Soldier Field on October 31, 2021 in Chicago, Illinois. (Photo by Jonathan Daniel/G

Garoppolo led three touchdown drives in the second half and another possession that ended with a field goal. He scored from the 2 in the third quarter and ran it in from the 5 in the fourth to make it 30-22.

Deebo Samuel had six catches for 171 yards. That gave him 819 through seven games, breaking Hall of Famer Jerry Rice’s club record of 781 set in 1986.

Elijah Mitchell carried 18 times for 137 yards and a touchdown, helping San Francisco (3-4) win for the first time since beating both Detroit and Philadelphia on the road to start the season.

Chicago (3-5) was looking for a reprieve coming off back-to-back losses to Aaron Rodgers and Green Bay and Tom Brady and Tampa Bay. But the Bears faltered in the second half against Garoppolo, who is from nearby Arlington Heights and played college ball at Eastern Illinois.

It didn’t help that top pass rusher Khalil Mack missed his first game since 2018 because of a foot injury. Coach Matt Nagy was away from the team after testing positive for COVID-19, and special teams coordinator Chris Tabor filled in for him.

Justin Fields threw for 175 yards and a touchdown. The rookie also ran for 103 yards and a score, becoming the first Bears QB to rush for 100 yards in a game since Bobby Douglass in 1973.

Cairo Santos made three field field goals to run his club regular-season record to 38 consecutive conversions. But he missed an extra point after Fields’ electric 22-yard touchdown run in the fourth.

Chicago settled for a field goal by Santos after driving to the 5 on the opening possession of the second half, extending its lead to 16-9.

Samuel then went mostly untouched when he turned a screen into an 83-yard gain up the left side to the 1, leading to a 2-yard touchdown run by Garoppolo. But instead of tying it, Joey Slye missed the extra point wide right.

The 49ers took the lead on their next possession when Mitchell plowed in from the 5. Brandon Aiyuk caught the 2-point conversion, making it 23-16 less then a minute into the third.

Fields then spun away from three defenders and got a huge block by Jason Peters against Fred Warner on a 22-yard touchdown scramble. But Santos was wide right on the extra point, keeping San Francisco on top 23-22 with 9:32 left.

49ers: S Jimmie Ward (quad) exited in the fourth quarter. ... Warner was evaluated for a concussion and cleared after being shaken up on Peters' block on Fields' TD run.

Bears: S Eddie Jackson (hamstring) clutched his leg and walked gingerly off the field after he was hurt defending Aiyuk on a long incompletion on the game's second play from scrimmage. ... RB Damien Williams (knee) was hurt in the first quarter. ... DT Akiem Hicks (groin) was active after missing two of the previous three games.