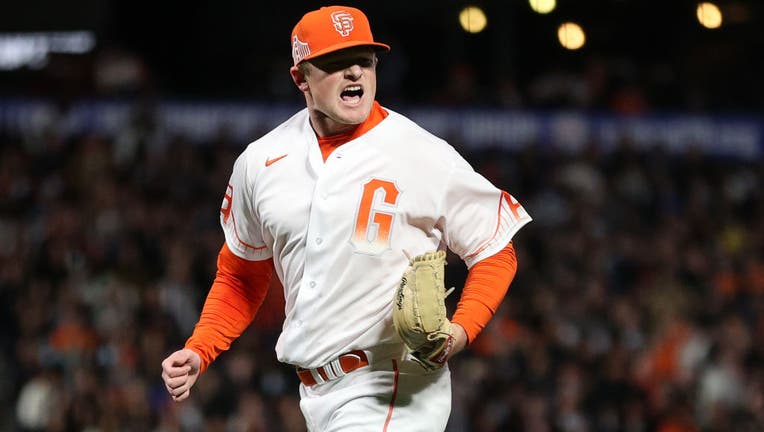 SAN FRANCISCO, CALIFORNIA - SEPTEMBER 28: Logan Webb #62 of the San Francisco Giants reacts after the Giants turned a double play with the bases loaded to end the fourth inning against the Arizona Diamondbacks at Oracle Park on September 28, 2021 in (Getty Images)

SAN FRANCISCO (AP) — Logan Webb will start for the San Francisco Giants in Game 1 of their NL Division Series on Friday night against the rival Los Angeles Dodgers.

Fellow right-hander and 14-game winner Kevin Gausman will go Saturday night in Game 2 for the NL West champions, having thrived lately with a little extra rest — something that factored into manager Gabe Kapler's decision when he felt equally confident in both pitchers.

"To be able to throw the first game for the best team in the league is pretty cool," Webb said after his bullpen session Wednesday. "I'm super excited for it. I feel an extra confidence when we're here just ‘cause it’s a great place to pitch, first of all, and also the crowd here is great."

On Sunday against San Diego, Webb pitched the 107-win Giants to their first NL West title since 2012 and also hit a two-run homer — the first home run of his career. He is 10-0 since losing May 5 at Colorado.

The Dodgers, who won 106 games during the regular season, beat the St. Louis Cardinals 3-1 in the NL wild-card game Wednesday night on Chris Taylor's two-run homer with two outs in the bottom of the ninth inning.

Kapler is eager to see Webb on another big stage as this rivalry takes on a new intensity.

"I don't doubt that there's some really good adrenaline at play here. This has been an exciting month, two months, three months for Logan on many different levels, including what's happened in the batter's box," Kapler said. "We've seen that that confidence can make your body bounce back well."

With an extra day of rest, Gausman allowed one run over seven stellar innings in Saturday's extra-inning loss to the Padres as San Francisco missed a chance to clinch the division. He struck out five and gave up six hits, and Kapler noted, "the extra days seemed to bring out the best velocity from Gaus, the best action on the split, a little bit more endurance in-game."

The 24-year-old Webb insists he and Gausman had no preference who took the ball for the playoff opener, proud to support each other either way.

"He's honestly more excited than I am, for me," Webb said. "It's pretty cool. That's the type of person he is. That's the whole thing when they asked us, is no matter who throws 1 and 2, we're both going to be available for 5. That's huge for both of us. We're both confident whatever game we throw in. Having a guy like that is pretty special for me."

Kapler said San Francisco's starter for Game 3 of the series on the road Monday might depend on who the Giants face. It will likely be left-hander Alex Wood or righty Anthony DeSclafani, a 13-game winner.

"I do think St. Louis or Los Angeles could factor into where we decided to go for Game 3," Kapler said.

Whether Webb can top that home run he hit in front of a packed house and so many family and friends, who knows? And just in case, he might be getting a little baserunning guidance from injured first baseman and slugger Brandon Belt.

"I was right here in the dugout, I thought it was pretty cool to see that," said Belt, who has taken grounders the past two days hoping to return this postseason from a broken left thumb. "I just thought we've absolutely got to work on his trot around the bases. On a scale of 1 to 10, I give it a negative-7. It was not great. Hopefully if he gets a few more of those he'll learn the correct jog around the bases."