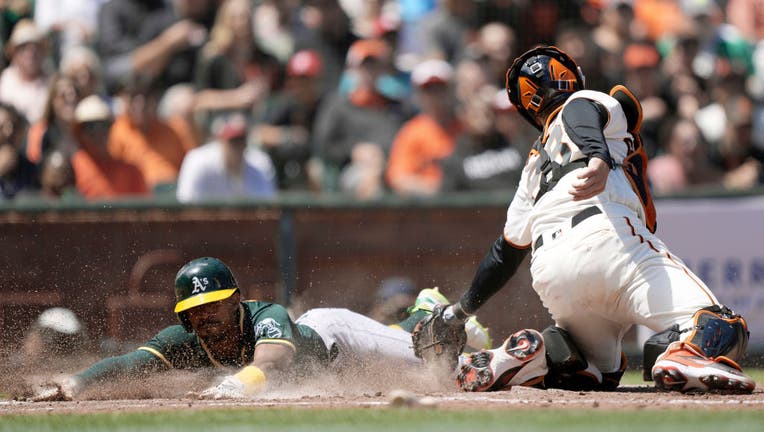 SAN FRANCISCO, CALIFORNIA - JUNE 27: Tony Kemp #5 of the Oakland Athletics slides past the tag of Buster Posey #28 of the San Francisco Giants to score in the top of the sixth inning at Oracle Park on June 27, 2021 in San Francisco, California. (Phot

Matt Chapman had two hits and two RBIs. Aramís García added a pair of RBI singles to help the A’s avoid a three-game sweep by their Bay Area rivals.

Oakland went 4-6 on its trip and fell out of first place in the AL West but picked up a game on Houston with its 16th win in June.

Buster Posey and Darin Ruf had two hits apiece for the Giants. San Francisco entered the day with the best record in the majors but missed a chance to move 25 games over .500 for the first time since 2012.

Irvin (6-7) allowed three hits, walked two and matched the longest start of his career. The lefty retired 12 of the first 13 batters and allowed one runner to reach second base.

Chapman’s two-run single off starter Sammy Long (1-1) in the first extended his hitting streak to a career-best 15 games. It followed consecutive hits and a double steal by Elvis Andrus and Matt Olson.

After Chad Pinder was hit by a pitch leading off the sixth and Tony Kemp walked, García singled to right off reliever John Brebbia to drive in Pinder. Irvin’s squeeze bunt scored Kemp, who beat the throw to home with a headfirst slide. Andrus’ sacrifice fly made it 5-0.

Giants: 1B Brandon Belt is seeking additional opinions on his right knee injury. Manager Gabe Kapler declined to say whether Belt would require season-ending surgery. ... RHP Logan Webb threw 20 pitches in a simulated inning before the game and could begin a rehab assignment soon. Webb has been out since June 3 because of a right shoulder strain.

Athletics: Following an off day, RHP James Kaprielian (4-1, 2.86 ERA) faces the Texas Rangers on Tuesday. Kaprielian has allowed five hits or fewer in each of his eight starts.

Giants: RHP Anthony DeSclafani (8-2, 2.77) pitches against the Dodgers and RHP Trevor Bauer (7-5, 2.57) in the opener of a two-game series at Los Angeles on Monday. DeSclafani has won his last four starts while allowing three earned runs over 27 innings.