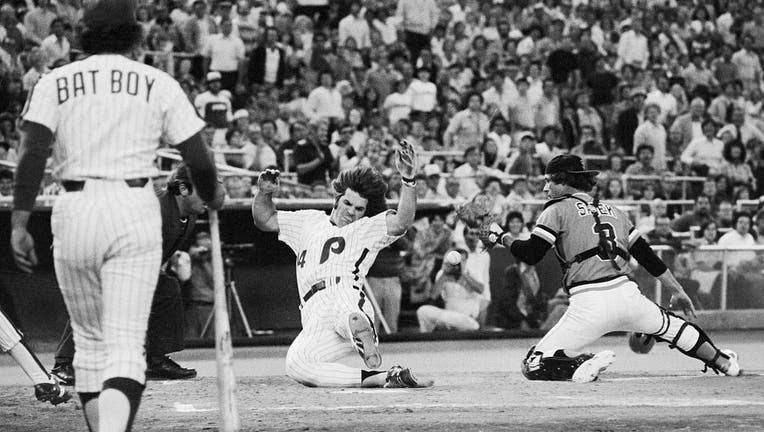 (Original Caption) Phils' Pete Rose scores on Mike Schmidt's single in the first inning here 7/6 as the ball goes between him and Giants' catcher, Mike Sadek on the throw from left field.

SAN FRANCISCO - Mike Sadek, a popular backup catcher who played all eight of his major league seasons with the San Francisco Giants, has died. He was 74.

San Francisco selected Sadek in the 12th round of the 1966 amateur draft but he opted to return to the University of Minnesota. The Twins then chose him in the fifth round the following year before the Giants picked him in the December 1969 Rule 5 Draft.

Sadek went on to work in the club's community relations department from 1981-99 before retiring.

"Mike was a Forever Giant in every sense of the term," Giants CEO Larry Baer said in a statement. "He spent nearly 30 years in the Giants organization between his time as a player and his role as a member of the front office. He had a genuine love for the game and was known for getting a laugh out of his teammates when they needed it the most. Our condolences go out to the Sadek family for their loss and we extend our thoughts to his teammates and friends."

He is survived by his son, Mike Jr., daughter-in-law, Melanie, and grandchildren Jackson, Nicholas and Maxwell. Sadek was preceded in death by his daughter, Nicole.