Hall of Fame trainer Bob Baffert speaks as Medina Spirit’s victory in the Kentucky Derby is in serious jeopardy because of a positive post-race drug test.

BALTIMORE - Rombauer romped to an upset victory in the Preakness on Saturday, denying trainer Bob Baffert's Kentucky Derby-winning Medina Spirit of a Triple Crown bid that would have carried a giant asterisk.

Rombauer came on strong down the stretch to overtake Medina Spirit. Medina Spirit finished first at Churchill Downs two weeks ago but that result remains in limbo because the horse tested positive for a steroid after the race.

Midnight Bourbon came in second at Pimlico Race Course, 3 1/2 lengths back, after going off with 3-1 odds. Medina Spirit ended up third after going off as the 2-1 favorite.

Rombauer covered the 13/16th-mile course in an unofficial time of 1 minute, 53.62 seconds.

The bay colt had skipped the Kentucky Derby on May 1 and was trainer Michael McCarthy’s first Triple Crown entrant.

The win allowed McCarthy to get a Preakness win before his mentor, Todd Pletcher, a seven-time Eclipse Award winner as trainer of the year.

In most years, the buzz surrounding the Preakness Stakes is about whether the Kentucky Derby winner can keep their Triple Crown hopes alive. But this year's race was nearly overshadowed by a doping scandal that threatened to disqualify Medina Spirit before the race even begins.

The Maryland Jockey Club and 1/ST Racing reached an agreement Tuesday with trainer Baffert that permitted Medina Spirit to run the second leg of the Triple Crown so long as Baffert subjected the horse to extra testing and monitoring. 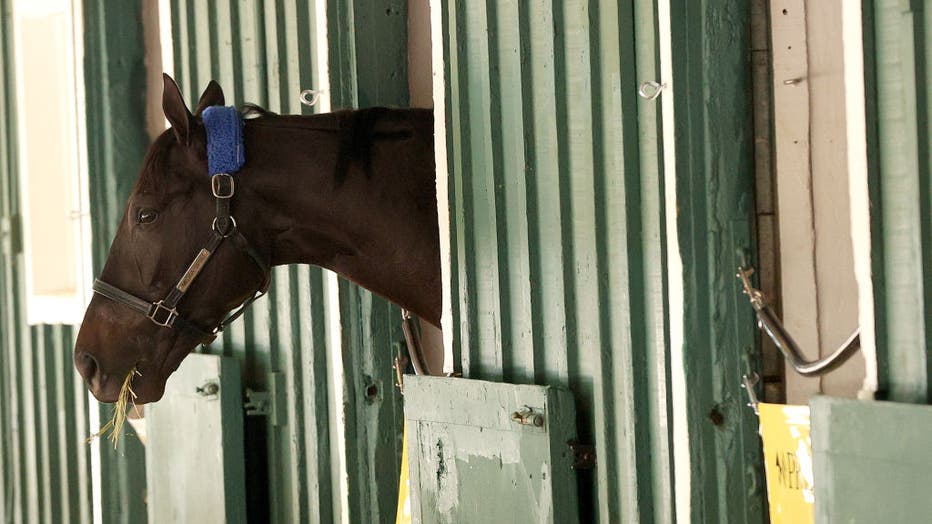 BALTIMORE, MARYLAND - MAY 10: Kentucky Derby winner Medina Spirit looks on from his stall after arriving at Pimlico Race Course for the upcoming Preakness Stakes on May 10, 2021 in Baltimore, Maryland. (Photo by Rob Carr/Getty Images)

If Medina Spirit tested positive again, the horse would not have been allowed to compete. But it passed three drug tests on Thursday and Friday, thereby qualifying for the race.

"As a condition of acceptance of the entry, Baffert has provided his consent to the Maryland Jockey Club to allow for rigorous testing and monitoring in addition to that conducted by the Maryland Racing Commission (MRC)," race officials said in a statement. "Those additional tests and monitoring are to ensure the fairness and integrity of the races entered by horses trained by Baffert."

In a statement of more than 500 words emailed to reporters by his lawyer in the hours before the post time for the Preakness, Baffert said that "while this has been extremely hard and emotionally draining on me and my family, today is not about Bob Baffert."

Despite the Centers for Disease Control saying Thursday that fully vaccinated people could go without a mask and Maryland dropping its mask mandate, Pimlico and the city of Baltimore have kept it in place. Adherence to that protocol was spotty at best Saturday, but the old track that has been showing its age got a fresh coat of cleaning products.

Hand sanitizer stations were available around Pimlico Race Course, which felt empty compared to the usual crowd. Capacity was capped at 10,000, and track employees walked around instructing fans to wear a mask.

This story was reported from Atlanta. FOX News and the Associated Press contributed.