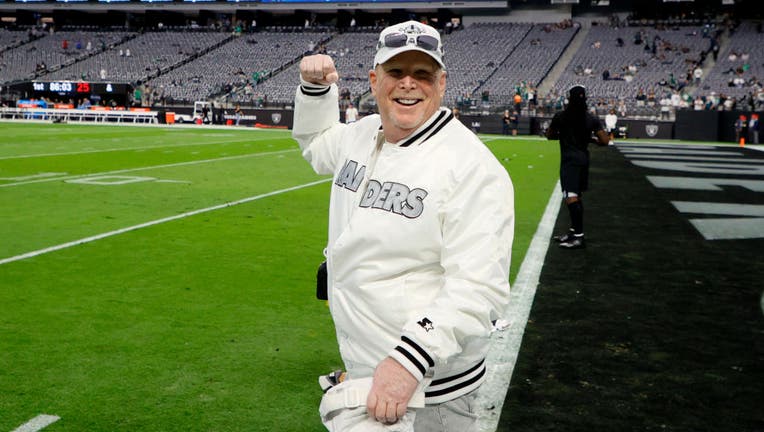 LAS VEGAS, NEVADA - OCTOBER 24: Owner and managing general partner Mark Davis of the Las Vegas Raiders reacts as he walks on the field before a game a Philadelphia Eagles at Allegiant Stadium on October 24, 2021 in Las Vegas, Nevada. (Photo by Ethan

LAS VEGAS - Las Vegas Raiders owner Mark Davis says he doesn't believe the team was targeted in the leaking of emails that led to the resignation of coach Jon Gruden.

Speaking after the NFL owners meetings ended Wednesday, Davis also acknowledged the team has reached a settlement with Gruden, who received a 10-year, $100 million contract to return to coach the team in 2018. He did not reveal terms of the settlement.

Asked about any recent conversations with Gruden, whose racist, homophobic and misogynistic comments were uncovered during an investigating of workplace misconduct at the Washington Football Team, Davis said: "He's hurt, he's really hurt. I understand that. But he understands the ramifications of what he said."

"We all have our demons in life," Davis added, "and we have to understand that."

Davis wondered about the timing of the leaking of the emails, and said he was not given a reason for delays in his team being told about them. The NFL has not and will not be releasing documents from the independent investigation of the Washington Football Team, saying the league is protecting the identities of those who testified. Gruden's emails were to Bruce Allen, the former president of the Washington franchise.

Davis would like the league to release a written report of the investigation.

"I would like to see some of the things that were charged," he said.

He also gave a lukewarm endorsement of Raiders general manager Mike Mayock, who was hired by Gruden.

And, echoing the sentiments of his late father, Al Davis, the Pro Football Hall of Fame owner, Davis noted about the way his team was drawn deeply into the Washington investigation, "We’re Raiders. We’re used to this."

Al Davis often took on the league and other teams on a variety of issues, including suing the NFL to allow him to move the franchise.

There were no matters up for voting on the owners' agenda for these meetings — the first in person since December 2019. There was a tweak to the Rooney Rule that requires interviews of minority candidates for coaching and executive jobs.

At least one in-person interview with a minority candidate for head coach and general manager positions who is not working for the interviewing team will be required. Many interviews during the COVID-19 pandemic have been done virtually.

The idea is to ensure that searches for such hires are diverse and thorough.

Through seven weeks of the schedule, the number of coaches’ challenges has dropped significantly from 62 in 2020 and 104 the previous season to 46. Troy Vincent, the NFL’s pro football operations chief, believes help from the replay officiating booth and league office in New York has led to the decrease.

Vincent also said the uptick in penalties overall stems from an increase in offensive holding calls.

Defending the process for replay reviews, Vincent said there were five or so reviews that required lengthier than normal stoppages.

"But there is an appreciation of getting it right," he said. "It is not about the time, the goal is to get it right. We’re always about efficiency, but we have the technology to get it right."