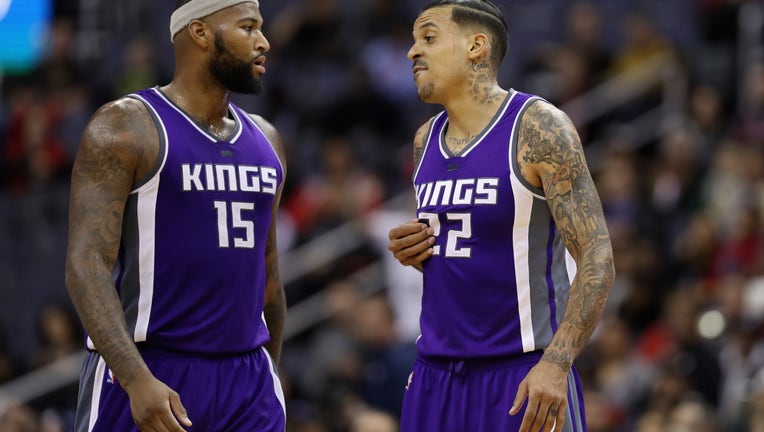 Grant Napear was placed on leave following a comment made on Twitter in response to a question by DeMarcus Cousins (left). Matt Barnes (right) joined in and then discussed further on Instagram live. (Photo by Rob Carr/Getty Images)

SACRAMENTO, Calif. - Grant Napear, the television play-by-play announcer for the Sacramento Kings and KHTK radio host, was placed on administrative leave on Monday by KHTK for comments made on Twitter.

The decision follows an exchange that began with Napear and former Kings center DeMarcus Cousins. Napear was asked what he thought about the Black Lives Matter movement as people across the nation are protesting the death of George Floyd, an unarmed black man who was killed in police custody.

When Cousins prompted Napear for his thoughts, he responded in all-caps that “ALL LIVES MATTER… EVERY SINGLE ONE!”

Cousins responded “lol as expected” to the phrase which started as an opposition to Black Lives Matter and is associated with criticism of the movement. Supporters argue the phrase dismisses decades of systemic oppression African Americans have faced.

KHTK had radio host Jason Ross announce the suspension Monday on “The Grant Napear Show”. “Grant Napear has been placed on administrative leave while we are investigating the statement that was made on Twitter,” Ross said, per the Sacramento Bee.

The Kings issued a statement on the matter. “Grant’s recent Twitter comments do not reflect our organization’s views and values. We are reviewing the matter further with our broadcast partners NBC Sports California and Sports 1140 KHTK.”

Napear, who has been the Kings’ play-by-play announcer since 1988, drew criticism from Chris Webber, another former Kings all-star who spent seven seasons with Sacramento. Webber responded to the exchange with clown emojis and his take.

“Demarcus we know and have known who grant [Napear] is,” Webber wrote in a tweet. “The team knows as well. I’ve told them many times. They’ve seen it. They know who he is.”

Napear responded in an interview with Sacramento Bee columnist Marcos Breton. “I’m not as educated on BLM as I thought I was,” he said. “I had no idea that when I said ‘All Lives Matter’ that it was a counter to what BLM was trying to get across.”

'We're hungry for change:' Youth come out to protest death of George Floyd