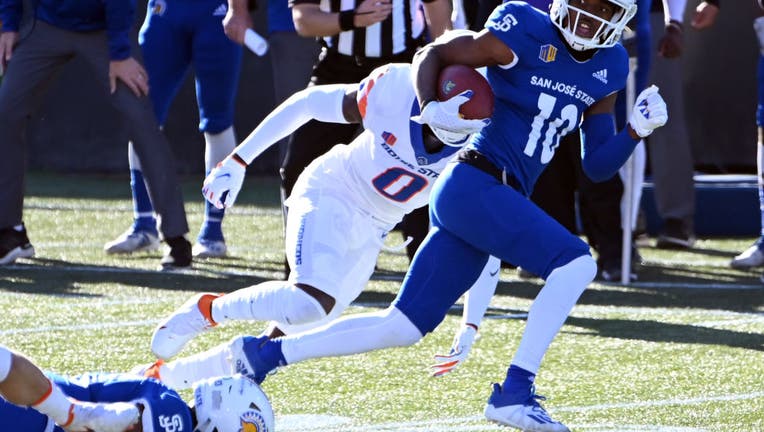 LAS VEGAS, NEVADA - DECEMBER 19: Wide receiver Tre Walker #10 of the San Jose State Spartans runs for a touchdown against the Boise State Broncos in the first half of the Mountain West Football Championship at Sam Boyd Stadium on December 19, 2020 in

LAS VEGAS - Nick Starkel completed 32 of 52 passes for 453 yards and three touchdowns to lead No. 25 San Jose State to its first Mountain West Conference championship, 34-20 over Boise State on Saturday.

It was the fourth 400-yard passing game of Starkel’s career, and second this season, his first with the Spartans. He spent the first three years of his college career at Texas A&M and Arkansas before transferring to San Jose State in January.

Tre Walker and Derrick Deese Jr. each had seven receptions. Walker led all receivers with 137 yards.

San Jose State held the Broncos to a paltry 12 yards on 24 rushes.

The Spartans scored on five of their seven first-half drives.

Shaking off a three-and-out on the first drive of the game and taking advantage of a missed field goal by Boise State’s Jonah Dalmas, the Spartans got on the board when Starkel hit Tre Walker in the flat on a corner blitz. Walker shook safety JL Skinner for a 55-yard play to put San Jose ahead 7-0.

Boise State got as close as San Jose’s 26, but after Cade Hall sacked Bachmeier on back-to-back plays, the Broncos settled for a 51-yard field goal by Dalmas. It was all they’d get until the final play of the half, when Dalmas connected from 50 yards. The Spartans stymied Boise State’s offense to just 118 yards, including minus-7 yards rushing.

Spartans kicker Matt Mecurio set a career high with four field goals — all in the second quarter. Mecurio tied an NCAA record and became the fifth player to kick four field goals in one quarter.

San Jose State could move up with No. 23 Buffalo losing to Ball State on Friday night in the Mid-American Conference championship. N.C. State is No. 24.