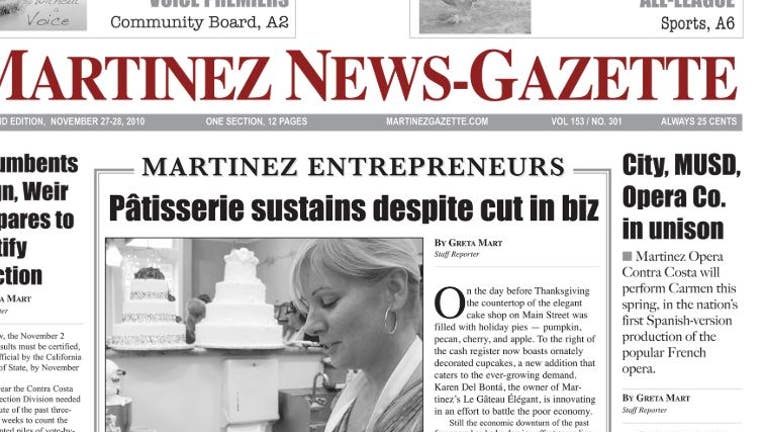 The Martinez News Gazette has been in existence since 1858.

MARTINEZ, Calif. - The Martinez News-Gazette, which proudly boasts it has been
published continuously since September 1858, told its readers Sunday morning that it will cease publishing, at least in print, with its Dec. 29 edition.

The news came in a front-page story Sunday, which also was
published on the newspaper's website and its Facebook page.

Rick Jones, the Gazette's editor the past six years, said on
Sunday that he isn't sure whether the paper will continue as an online-only endeavor. The Gazette has been sustained largely by paid legal advertising, which Jones said would not carry over to online.

"We do have a decent online presence and an active Facebook page," Jones said. He said it's hard to find longtime Martinez residents who haven't either been loyal Gazette readers, or worked as delivery carriers for the
paper, which is published twice a week.

"This paper means a lot to the community," Jones said.

The Gazette's closure announcement caused a stir on a local
Facebook page called Martinez Rants and Raves. Among many members there, Sunday's announcement came as a shock.

"I am sad to hear the Martinez Gazette will not be there for our
city to share local events and for parents to clip out articles and pictures about their kids activities and sports," Martinez resident Bob DiBetta posted there. "Growing up I remember, I felt proud when my family clipped the article about our second-grade class making puppets for a local show."

The Gazette's announcement comes after the regional East Bay Times has cut back on coverage in Martinez and other nearby cities, and after at least two upstart local print newspapers have come and gone.

The Gazette is owned by Vallejo-based Gibson Radio and Publishing, which also owns newspapers in Benicia and Dixon. Jones said the Gazette has somewhere between 4,000 and 4,500 subscribers. There are only two full-time employees - Jones is one of them - and three part-timers.

Jones said he knows he has local support; "Every person has asked me, 'What can we do to save it?' "I'm really trying to get over the emotional part of it and trying to be more pragmatic about it," he said.