The mid-air collision happened during the morning of Oct. 1, and people living near where the crash happened say they are not that surprised that the incident took place. FOX 10's Brian Webb reports.

CHANDLER, Ariz. - Two people are dead after a helicopter collided mid-air with a small plane before crashing Friday near the Chandler airport.

According to the Chandler Fire Department, a mid-air collision between a helicopter and a fixed-wing plane was reported on Oct. 1 near the Chandler Municipal Airport.

The crash reportedly happened around 7:30 a.m., on the south side of the airport.

"The helicopter appeared to be in the flight path of the incoming plane, and landing gear clip the rotor of the helicopter," said witness Matthew Trent.

Authorities say while the plane landed safely, the helicopter crashed and exploded on impact.

SkyFOX video showed a fire crew using a tarp to cover the helicopter’s burned wreckage in brush. Fire officials said two people on board the helicopter died. It is unclear if they died in the crash or the fire. Chandler Police officials have since identified the two people who died as 34-year-old Michael Papendick and 27-year-old Jessica Brandal.

Brandal was the flight instructor, while Papendick was a student. Both were involved in Dodge City Community College's DC3 Flight Instructor Program, which is based in Kansas but operates in the Chandler airport.

FAA officials have identified the helicopter as a Robinson R22.

The plane, identified by FAA officials as a Piper PA-28, was upright on the ground, just off a runway. The plane suffered a damaged landing gear, but the fuselage appeared intact. A flight instructor and a student who were onboard the plane were not hurt. Chandler Police officials say they are not releasing the identities of those onboard the plane.

"Our officers [are] taking it pretty hard. We have our stress management people out here to get them help if they need it," said Chandler Police Sgt. Jason McClimans.

"These people that [died] today, hopefully died doing what they love. What better way to go," said Trent.

The crash, which happened near an airport in Chandler, took the life of two people, including 34-year-old Michael Papendick. FOX 10's Justin Lum spoke with Papendick's sister-in-law.

Hours after the crash, it has emerged that Pappendick was studying to become a pilot.

Papendick, a Navy veteran, reportedly started training to become a helicopter pilot weeks ago. He was the sole provider for his family, as well as the proud father of an 11-month-old who will celebrate her first birthday later on in the month.

"There's no words, really. My heart's broken for my sister right now. They were about to start trying for baby number two," said Papendick's sister-in-law, Rachel Lima.

Papendick was studying to become an EMS pilot, and only had about 30 hours under his belt. Lima said her sister, Rebecca, had a gut feeling that something terrible happened to her husband.

"You never think something like this happens to you, you know. This is something that happens to other people, not you, so when you're faced with that reality for a moment, you know your first reaction is to kind of to deny it, and that's what we did, really, so it was tough when we when we did find out that our suspicions were confirmed," said Lima.

Papendick was remembered for his sense of humor, and the joy he brought to his loved ones.

"Just the most precious person. I'm so grateful to have known him for the short period of time that I did, because you don't meet very many people like him. He was one of a kind and he is a wonderful, wonderful man, and he gave everything he had to everybody," said Lima.

Some who live in the area say air traffic in the area has really increased over the years, with lots of small planes and helicopters fighting for airspace. Those residents also say they are not that surprised that something like this happened.

"You know that something is going to happen, because there’s so many small planes are coming from that way and trying to land." said Lynn Becker, who has lived in the area for 30 years.

The Federal Aviation Administration released the following statement on the crash:

"A single-engine Piper PA-28 and a Robinson R22 helicopter collided in the vicinity of Chandler Municipal Airport in Arizona around 7:42 a.m. local time today. The helicopter crashed near the airport, and the airplane landed safely on the runway with a damaged landing gear. Initial reports indicate two people were aboard each aircraft. The FAA will release the tail numbers after investigators verify them. The FAA and National Transportation Safety Board will investigate. The NTSB will be in charge of the investigation and will provide additional updates. Neither agency identifies people involved in aircraft accidents."

Chandler Police are seeking witnesses and people who may have videotaped the collision and the crash of the helicopter.

Two people are dead after a helicopter reportedly collided mid-air with a small plane before crashing Friday near a Chandler airport. 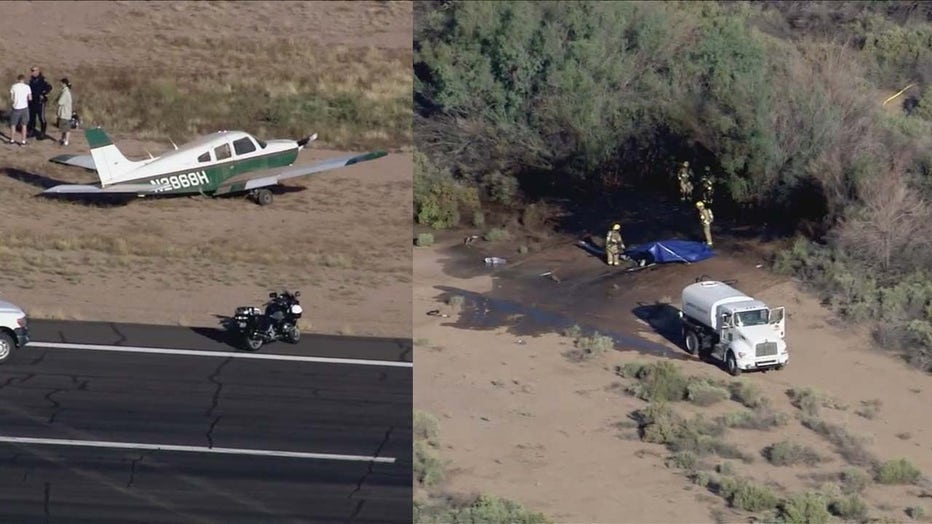 According to the Chandler Fire Department, a mid-air collision between a helicopter and a fixed-wing plane was reported on Oct. 1. The plane landed safely, but the helicopter crashed and caught fire.