Fired OPD police chief to file lawsuit against the city

OAKLAND, Calif. - Former police chief Anne Kirkpatrick, who was fired by the Oakland Police Commission two weeks ago, said on Thursday that she has hired a lawyer and is going to take "legal action" in the wake of her ouster.

She said she hired John Keker of Keker, Van Nest and Peters in San Francisco, but she did not say specifically what her plan was, other than she was preparing a lawsuit against the city.

"There will be several causes of action and the attorneys are preparing that as we speak," Kirkpatrick said.

Kirkpatrick was fired without cause by the police commission, a move that was approved by Mayor Libby Schaaf. Schaaf has said it was a personally hard decision for her to make, but the trust had been broken between the chief and the commission.

At a news conference Thursday, Kirkpatrick was joined by another former Oakland police chief, Howard Jordan.

Jordan, who retired for medical reasons in 2013, said that Federal Monitor Robert Warshaw, the man who now oversees the Oakland police department as it strives to meet a set of police reforms as part of a longstanding legal agreement, should be fired and he is the "fox guarding the hen house."

Former police chief Anne Kirkpatrick, who was fired by the Oakland Police Commission two weeks ago, said on Thursday that she has hired a lawyer and is going to take "legal action" in the wake of her ouster. Cristina Rendon reports

Warshaw does have two roles: He is both the oversight monitor and the compliance director of the police oversight, and several critics have said this is a conflict of interest.

Both Jordan and Kirkpatrick accused Warshaw of changing the metrics of the police reforms the department needs to meet, which makes it impossible to reach the end of the agreement that first began with the notorious "Riders" case in Oakland.

Kirkpatrick told KTVU two weeks ago that she was told her department was very close to being in compliance with a set of 50 police reforms mandated by a legal Negotiated Settlement Agreement in 2003.

But then the goal posts would be moved, she said, and new reforms would be added. 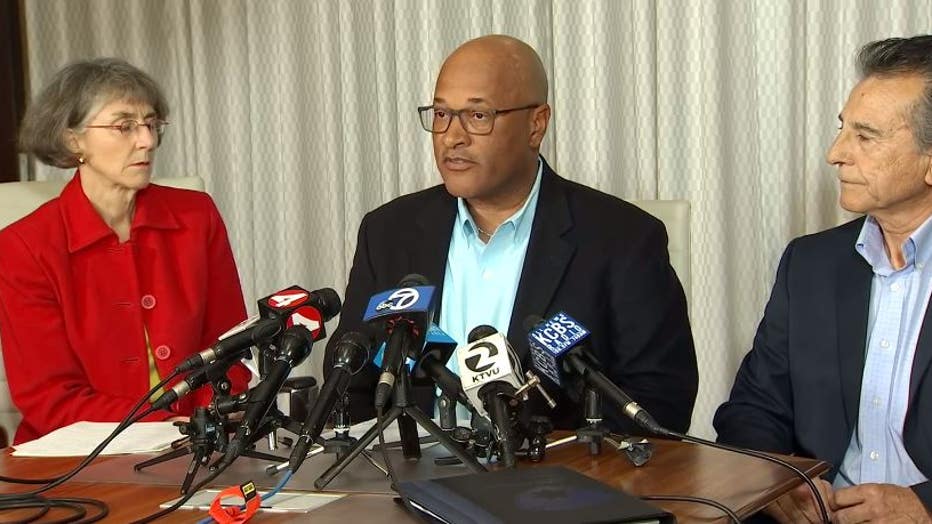 ormer OPD Chief Howard Jordon: Federal monitor Robert Warshaw should be fired because he is the "fox guarding the hen house." March 5, 2020

“It's a million dollar contract,” she said at the time. “Where is the incentive to find you in compliance? We’ve been asking for the metrics so we know what we’re moving towards, but some of these tasks do not have metrics. how do you hit a mark that you don’t know what is being measured?”

Warshaw has repeatedly declined requests for comments, as he is considered like a judge in this case.

In addition, Oakland City Councilman Noel Gallo said at the news conference, which was arranged by PR strategist Sam Singer, that he is planning to fly to Washington, D.C., to meet with Department of Justice officials to ask them to investigate the length of the federal oversight program over the police department, which is now heading into its 18th year.

Jim Chanin, a civil rights attorney who sued Oakland police in 2003, said he also agrees that the federal oversight has gone on far too long but he added emphatically that it should not end at this point because all the police reforms required have not been completed.

And he added that the money paid out for the oversight is far less than the money the city has paid out in terms of police abuse settlements in the past.

Chanin also has repeatedly said that he and John Burris did not want to initially hire Warshaw, as he used to be a police chief on the East Coast, but that they both conceded after the police department insisted that Warshaw be the one to oversee them.

ormer OPD Chief Howard Jordon: Federal monitor Robert Warshaw should be fired because he is the "fox guarding the hen house." March 5, 2020

READ: The federally-mandated tasks in which OPD is out of compliance

Cristina Rendon is a reporter forKTVU.  Email Cristina at cristina.rendon@foxtv.com and follow her onTwitter @CristinaKTVU