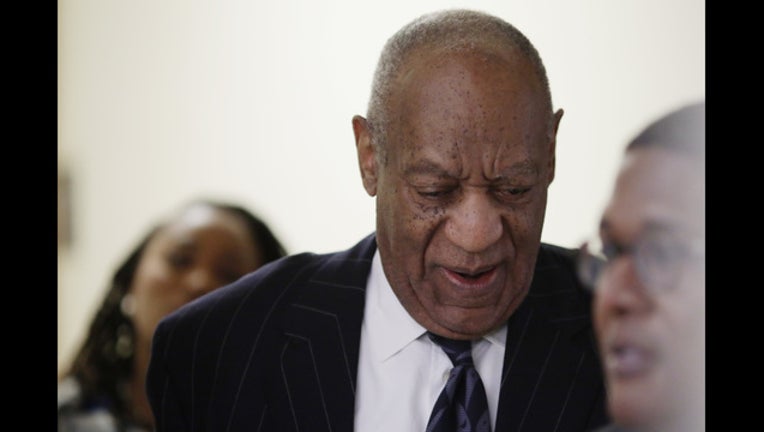 Actor and comedian Bill Cosby returns to the courtroom after lunch as his sexual assault case enters the third day at the Montgomery County Courthouse April 11, 2018 in Norristown, Pennsylvania. (Photo by Dominick Reuter-Pool/Getty Images)

NORRISTOWN, Pa. (AP) - Decades after they say Bill Cosby knocked them out with intoxicants and sexually assaulted them, three of his accusers confronted the 80-year-old comedian in court Wednesday, with one woman pointedly calling him a "serial rapist" and another asking him through her tears, "You remember, don't you, Mr. Cosby?"

The women's charged rhetoric prompted several mistrial requests from Cosby's lawyers -- which were denied -- as prosecutors built their case that Cosby was one of Hollywood's biggest predators long before he met Andrea Constand, the chief accuser in his sexual assault retrial.

Now well into middle age, the accusers spoke of entering Cosby's orbit as starstruck young women seeking career help or, in the case of a casino bartender from Reno, Nevada, simply looking for a fun time. All of them testified they wound up unconscious from the pills or alcohol he gave them, unable to say no or resist as he had his way with them.

"I was raped," declared the former bartender, Janice Baker-Kinney, who was 24 when she says Cosby gave her pills she suspected to be quaaludes and had sex with her in 1982.

Another accuser, sobbing uncontrollably as she testified, told jurors she got to know Cosby through a family connection as a 17-year-old aspiring model and actress. Chelan Lasha said Cosby gave her a little blue pill he described as an antihistamine to help her get over a cold, along with two shots of amaretto "to help break up the cough." The combination immobilized her and rendered her unable to speak.

Cosby then assaulted her, touching her breast and rubbing himself against her leg, Lasha said.

"I could barely move. He guided me there, and he laid me in the bed. I couldn't move any more after that. He laid next to me, and he kept touching my breast and humping my leg. I remember something warm hitting my leg," she said.

Asked what was going through her mind, Lasha testified: "Dr. Huxtable wouldn't do this. Why are you doing this to me? You're supposed to help me be successful."

Turning to Cosby, she made the remark that suggested he remembered the encounter.

Cosby, who portrayed kindly Dr. Cliff Huxtable on his hit TV comedy "The Cosby Show," turned away and smiled slightly.

Lasha, Baker-Kinney and a third woman who also testified, Heidi Thomas, are among five additional accusers whom prosecutors plan to call to make the case that Cosby, once revered as "America's Dad," was a Hollywood predator who is only now facing a reckoning after allegedly assaulting Constand at his suburban Philadelphia home in 2004.

The additional accusers could also help prosecutors insulate Constand from the defense's contention that she is a "con artist" who preyed on Cosby's vulnerability after the 1997 killing of his son, Ennis, and then framed him to score a big payday via a $3.4 million civil settlement.

The defense has urged jurors to ignore the other accusers, calling their allegations irrelevant to the charges involving Constand, who turned 45 on Wednesday.

Outside court, Cosby spokeswoman Ebonee Benson called the testimony from prior accusers a "prosecution by distraction."

"When you don't have a case, you'll fill the case with something else," she said. "Once the jury hears the evidence of the case we are here for, they will render a verdict of not guilty."

Constand, a former Temple University women's basketball administrator, alleges Cosby gave her pills and then molested her. He says the encounter was consensual.

His first trial last year ended in a hung jury.

Under questioning by prosecutors Wednesday, Baker-Kinney said she has long blamed herself for taking the pills that Cosby gave her.

"It pisses me off that that's something I'm carrying forever," she said. "I don't want to have that guilt and shame. I don't want to think that something that happened to me is my fault. I push it away. I don't think about it. But it's going to be with me forever."

Baker-Kinney was unflappable under cross examination, calling out Cosby lawyer Tom Mesereau for rolling his eyes at her and chiding the veteran defense attorney for what she said was a bald attempt to twist what she told police about being assaulted.

She also turned back his attempts to dent her credibility, freely admitting that she experimented with LSD and other drugs in her youth and had a long bout with alcoholism. She denied using drugs during the time she said Cosby assaulted her, other than the pills she said he gave her.

"It still takes me everything within my being to say the words, `I was raped,"' Baker-Kinney testified, after shying away from that characterization during direct examination.

Thomas, the first accuser to take the stand, was a 24-year-old aspiring actress when her agent arranged for Cosby to give her acting tips at a session in Reno. She testified that Cosby gave her wine as they rehearsed a scene in which she portrayed a drunken woman. She said the wine knocked her out, and Cosby then forced her to perform oral sex.

She said she remembered feeling sick and wondering, "How did I get here?"

Under cross examination Wednesday, Thomas rejected a defense lawyer's insinuation that she would do anything to help Constand.

"You've made it very clear that you want to help Andrea Constand, haven't you?" Kathleen Bliss asked.

"I want to see a serial rapist convicted," Thomas replied.

The Associated Press does not typically identify people who say they are victims of sexual assault unless they grant permission, which Constand, Baker-Kinney, Lasha and Thomas have done.