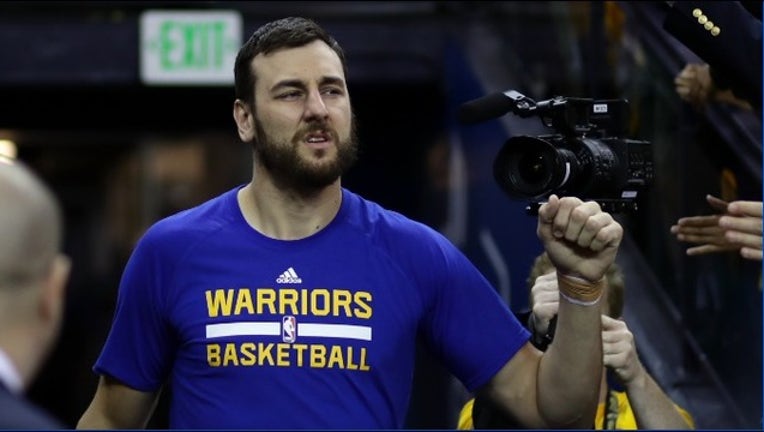 Andrew Bogut, who played on the Warriors 2015 champion team and the 73-win team, is rejoining the Warriors. (Photo by Ezra Shaw/Getty Images)

OAKLAND, Calif. (AP) - The Golden State Warriors signed Andrew Bogut, who is expected to rejoin the team next week and add depth heading into the playoffs.

The Warriors made the announcement Wednesday, after Bogut was cleared by his Australian team, the Sydney Kings. The Warriors are without Damian Jones, who needed surgery after injuring his left pectoral muscle in December.

"He's still got something to offer," coach Steve Kerr said. "Whatever role that means, he's ready to accept and take on the challenge and we're excited to have him."

Golden State has struggled defensively, losing in embarrassing fashion at home to Boston 128-95 on Tuesday night, so Bogut's 7-foot presence in the paint could be timely.

He played on the Warriors' 2015 champion team and the 73-win team the following season that lost in Game 7 of the NBA Finals to LeBron James and the Cavaliers.

"I think it will be great for us to have Bogut back," Draymond Green said after Wednesday's practice, when the two-time defending champions met and re-established their goals. "We all know what Bogut brings to the table, so I think it will overall help us, especially going down this stretch where it's going to be a tough run to try to three-peat."

The 2005 No. 1 overall draft pick out of Utah, Bogut appeared in 23 games for the Lakers last season and made five starts. He averaged 1.6 points and 3.4 rebounds in 9.4 minutes.

Bogut was injured in Game 5 of the 2016 NBA Finals and missed the rest of the series. Then he got traded to Dallas to create salary cap room for Golden State to sign Kevin Durant, who went on to become back-to-back Finals MVP while bringing the franchise two more titles.

The Warriors scouted the 34-year-old in Australia and had to wait on his work visa and clearance from FIBA to sign him.