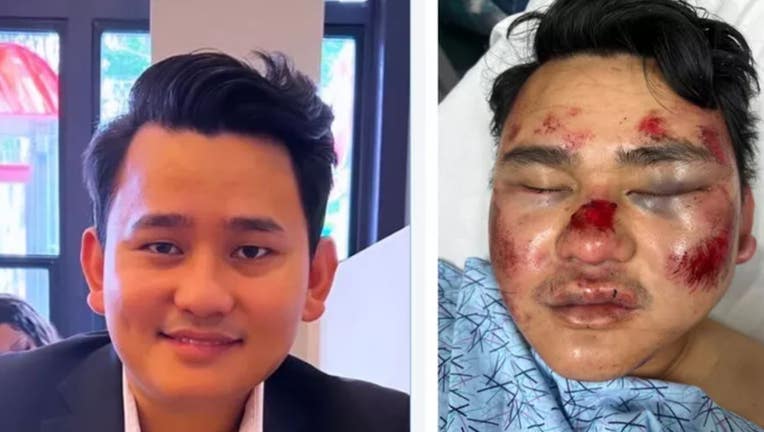 OAKLAND, Calif. - A friend of 25-year-old Sagar (Ocean) Tamang said he was brutally attacked in front of Fox Theater in Oakland last week.

In a post about the attack, Bimala Thapa recalled what happened to Tamang on May 28 and as he left work and headed out for a sandwich from a street vendor in downtown Oakland.

"While he was walking, he got brutally attacked from the backside and was left in the ally with only boxer, T-shirt and socks," said Thapa. "His phone, wallet, pants, boots and long coat where robbed as he was left unconscious on the street."

Thapa said he was rushed to the Highland Hospital Emergency and treated for level 1 trauma. Photos on the post show Tamang's face badly bruised and swollen.

Thapa said they are originally from Nepal and longtime residents from San Francisco, and just moved to East Bay.

"We have the right to feel safe where we live without constant fear," said Thapa.

"These hate crimes need to stop," said Thapa. "Our hearts goes out to all the people who have been affected, injured and killed by this wave of racist crimes toward the Asian community."

KTVU has reached out to Oakland police for details in this case.

Last month, a Cambodian woman was left with a bloody face and broken nose after an attack in the parking lot of a Safeway in San Leandro.