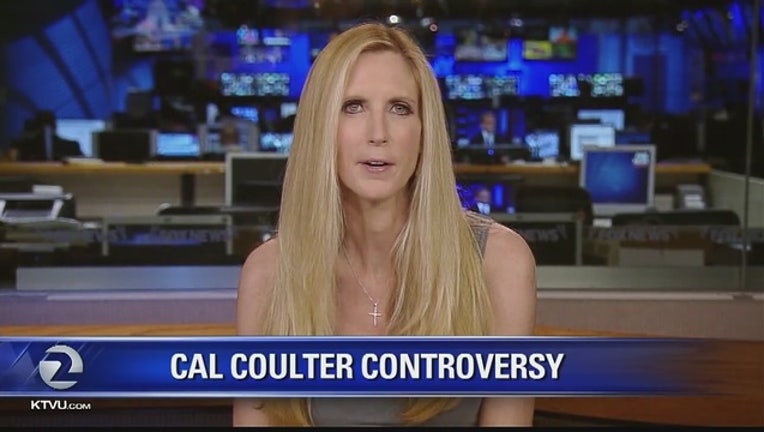 BERKELEY, Calif. (AP) -- The word "CANCELED" is printed across a poster of Ann Coulter's face at the University of California, Berkeley. But that appears to be wishful thinking.

The campus is bracing for trouble next week, when the conservative provocateur has vowed to speak in defiance of the university's wishes. Officials, police and even the campus Republicans who invited Coulter say there is reason to fear violence in what is being called the Battle for Berkeley.

Berkeley's reputation as one of the country's most liberal universities, in one of America's most liberal cities, has made it a flashpoint for the nation's political divisions in the era of Donald Trump.

The campus and the city itself have become a target for militant right-wing organizations that have clashed in recent months with militant left-wing or anarchist groups from the San Francisco Bay Area.

Both favor hoods to conceal their identities and a variety of weapons, including Molotov cocktails, brass knuckles and soda cans filled with concrete.

UC Berkeley has been synonymous with protest from the earliest days of the 1960s Free Speech Movement, when students fought for the right to speak out and set off a wave of campus activism around the country.

But officials say what they're seeing now does not involve students and is a new type of extremely violent protest.

"There is no doubt that over the last few months the city and campus have become a stage upon which national political conflicts are playing out," said university spokesman Dan Mogulof. "We are in new and challenging times. I don't think we've seen anybody who has cracked the code here."

Last weekend, bloody street brawls broke out in downtown Berkeley at a pro-Trump protest that featured speeches by members of the white nationalist right. They clashed with a group of Trump critics who called themselves anti-fascists.

Police arrested 20 people and said dozens were injured. They confiscated bats, knives, bear spray, pepper spray and other weapons, according to police.

And in February, protesters smashed campus windows, set fires and hurled firebombs at police, forcing the cancellation of a speech by right-wing writer Milo Yiannopoulos, who was also invited by the College Republicans.

Police and the city have been criticized for not doing more to prevent the violence of the past few months but say that stepping in with full-scale riot forces could have led to more bloodshed.

Campus Police Chief Capt. Alex Yao said police have learned lessons from the recent clashes and plan a different approach, which he would not disclose.

"Berkeley is a place of longtime left-wing protest," he said. The right-wing extremists "want to make it a flashpoint."

Berkeley police and university officials scrambled this week to cancel or delay Coulter's speech next Thursday, with Chancellor Nicholas B. Dirks warning that law enforcement authorities have "very specific intelligence" of threats "that could pose a grave danger" to Coulter and others.

Yao, the campus police chief, said protesters bent on violence are planning to descend on Berkeley from around the state and other parts of the country.

After attempting to call off the event and postpone it until September -- which Coulter refused to do -- Dirks offered her a new date of May 2 at what he called "an appropriate, protectable venue."

She rejected that, saying she "can't do May 2." Moreover, she tweeted, "THERE ARE NO CLASSES AT BERKELEY THE WEEK OF MAY 2." The period is known as Dead Week, when students are studying for final exams.

"I'm speaking at Berkeley on April 27th," she declared.

It remains unclear where Coulter will speak. The event is being largely subsidized by the Young America's Foundation, a conservative group. It is footing $17,000 of Coulter's $20,000 speaking fee.

The Berkeley College Republicans said the university's actions amount to a ban on free speech that makes them more determined to have Coulter come.

"The problem is that we're now part of a larger fight between two different cultural groups," said Tory Woreen, 21, a member of the College Republicans. "We would hope that police do their jobs and actually protect civilians."