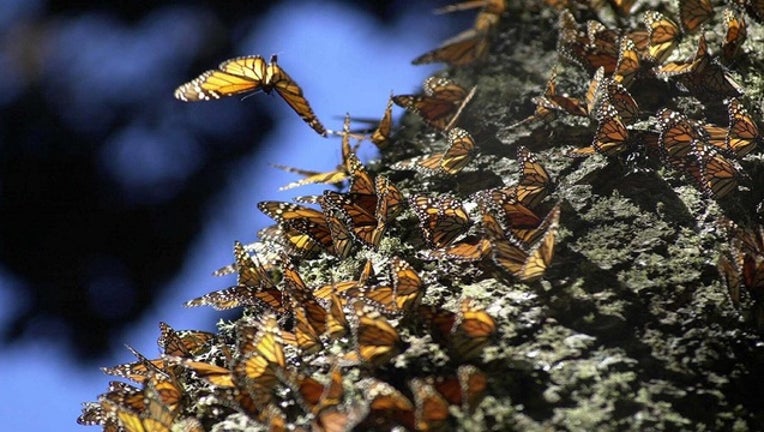 384897 02: Monarch butterflies gather on an Oyamel tree January 29, 2001 at the butterfly sanctuary in Michoacan, Mexico. Some 100 million or more of the orange and black butterflies migrate annually from Canada to the forest in Michoacan. (Photo by

HOUSTON (AP) - The nonprofit National Butterfly Center has asked a federal judge to stop border wall activity on its property as the Trump administration gears up to build new walls and fencing in South Texas and may soon win funding for more.

In a motion filed late Monday, center director Marianna Trevino Wright says heavy machinery has been driving through their property for a week, including a road grader accompanied by a U.S. Customs and Border Protection vehicle. Wright alleged that someone had cut the lock on a center fence and replaced it with a lock belonging to CBP.

CBP has announced it will start this month on the first of 33 miles (53 kilometers) of new walls and fencing in South Texas' Rio Grande Valley. Congress funded construction last year.

Heavy construction equipment started to appear last week in the Rio Grande Valley, the southernmost region of Texas. Facing strong opposition from many landowners, CBP has said it will start construction on federally owned land, likely on property that's part of the Lower Rio Grande Valley National Wildlife Refuge . The planned construction would eventually cut through the butterfly center, a state park, and a century-old chapel on the bank of the Rio Grande, the river that forms the Texas-Mexico border.

"We will not stand idly by as the bulldozers roll in," Wright said in a statement.

While the construction Congress funded last March was labeled by many as fencing, CBP's plans call for a concrete wall that extends to the height of the existing levee, topped by 18-foot (5.5-meter) steel bollards and with a 150-foot (45-meter) enforcement zone cleared in front.

And more construction may soon be funded. Congressional negotiators trying to avoid another government shutdown reached an agreement Monday to fund an additional 55 miles (88 kilometers) of barriers in the Rio Grande Valley.

Top Republicans declared victory over Democrats who have vowed not to fund a border wall, saying that they had won support for new barriers anyway.

Scott Nicol, a longtime resident of the valley and co-chair of the Sierra Club's Borderlands team, accused Congress of continuing "to play word games" and "ignoring the real, on-the-ground damage that border walls will inflict."

"These new border walls will destroy homes and farms and wildlife refuges, just like the ones Congress funded in 2018," Nicol said.

The butterfly center and its governing body, the North American Butterfly Association, asked in their motion to ban government agents from "taking any action" on center property "in furtherance of the construction of a border wall."

The Department of Homeland Security did not respond to a request for comment Tuesday. But government lawyers filed paperwork saying they would respond to the butterfly center's request by Feb. 22.