CA attorney general calls for an end to illegal evictions

Following reports of landlords illegally evicting tenants across the state, California Attorney General Rob Bonta called on law enforcement to prevent renters from unlawfully getting kicked out of their homes.

OAKLAND, Calif. - Following reports of landlords illegally evicting tenants across the state, California Attorney General Rob Bonta called on law enforcement to prevent renters from unlawfully getting kicked out of their homes.

The state’s Department of Justice’s Housing Strike Force cited instances of landlords changing locks, shutting off the utilities, or removing a tenant’s personal belongings without permission – all of which could have legal or criminal implications.

"These illegal so-called self-help evictions are an attempt to avoid the courts and illegally kick tenants to the curb without regard for their rights and the law," Bonta said. "Law enforcement should intervene to prevent illegal evictions."

Under California law, the only legal way to evict a tenant is through a court order.

Bonta called the current situation a "housing affordability crisis" with one-in-seven Californians behind on rent, and roughly 1.5 million at risk of being evicted.

Tenant advocates say they’re seeing an uptick in threats, harassment, and intimidation among some landlords in hopes of getting renters out.

But the president of the California Landlord Association said the majority of landlords know and follow the legal process, and disputes that illegal evictions are more commonly.

"That is simply not true," said President Chris Airola "That is a lie. We know the laws."

In California counties and cities without additional renter protections, landlords can legally evict tenants for nonpayment of rent, criminal activity, owner move-in, among other reasons.

But landlords are required to go through the courts, which can take months for a judge to issue a legal order and for a sheriff or marshal to remove a tenant.

Among this new legal guidance, Bonta emphasized that law enforcement has a responsibility to stop unlawful evictions and work to resolve landlord-tenant disputes. 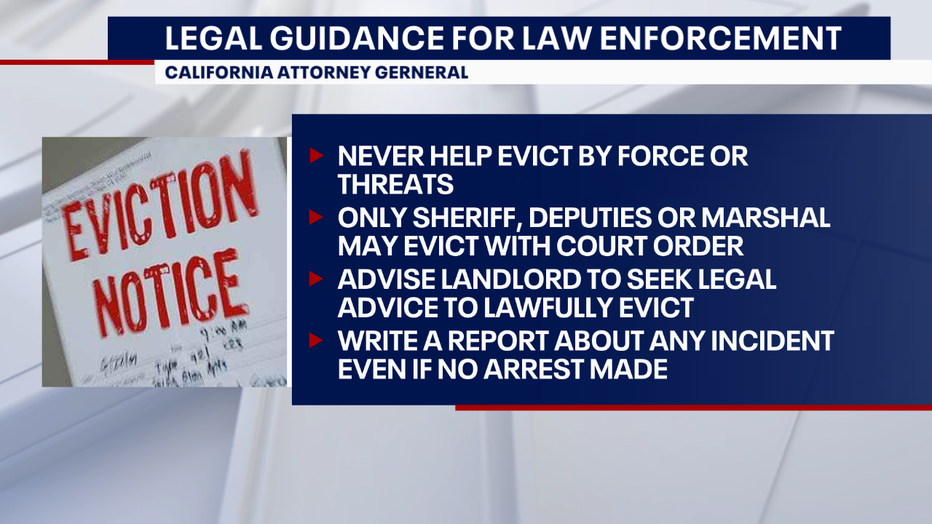 Alameda County Sheriff’s Office, which is one agency responsible for carrying out evictions, is in support of the new guidance, according to Lt. Ray Kelly who said almost all of the new rules were already in place.

For landlords and tenants in need of resources and additional information visit the state’s Housing Portal, including legal advice.