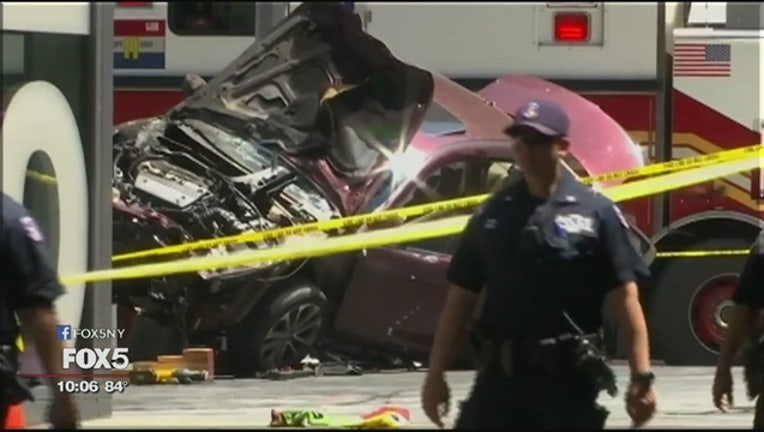 NEW YORK (AP) -- Fears of a terrorist attack prompted officials to ring many of the pedestrian plazas of Times Square with squat steel posts capable of stopping a speeding vehicle.

But those barriers only cover so much ground. There were none of them Thursday at the corner where a man steered his car onto a busy sidewalk and began barreling through crowds of pedestrians, running down 23 people and killing one before one of the metal posts finally stopped him.

The bollard that stopped the car driven by Richard Rojas likely saved lives by preventing it from entering an even more densely packed pedestrian plaza, and some New Yorkers are wondering whether the barriers should be deployed on many more sidewalks, much as they are now at sports stadiums and airports nationwide.

"We can and should do more to keep our residents and visitors safe on our streets and street design is the first place to start," said Ydanis Rodriguez, a city councilman from Manhattan who chairs the transportation committee. He called for the installation of more bollards at the ends of city sidewalks in busy areas.

The bollards come equipped with special locks that firefighters can undo so they may be removed in an emergency. In Times Square, they are embedded no more than 18 inches (46 centimeters) into the ground, a necessity given the subway station just beneath the city's surface.

Still, that was enough of an anchor to abruptly stop Rojas's Honda Accord, which was tossed into the air and wound up on its side, smoking, after running into a line of the barriers.

"You always want to make a vehicle hit two barriers; that way no barrier can fail," Reiter said. "You have to space for two considerations: vehicle stopping and pedestrian access."

City officials didn't say how many bollards have been installed in recent years.

In a radio interview Friday with WNYC's Brian Lehrer, Mayor Bill de Blasio said police officials are "evaluating" whether new security measures, including the installation of more bollards, are necessary.

"And we're going to look at Times Square and see -- obviously we'll look at some other key locations -- if we have to do different things in our approach," he said.

Joseph Rosetti, vice chairman of Guidepost Solutions, a security consulting firm, said bollards became the "in vogue thing" in recent decades, after a series of incidents in which disgruntled employees crashed their cars into the lobbies of office buildings.

They've since become ubiquitous -- some even look like flower planters -- though Rosetti cautioned that there is no way to fully fortify a heavily trafficked public place such as Times Square, noting that some people have even called for the elimination of car traffic in the Crossroads of the World.

"There's always a balance between security and trying to facilitate commerce," he said.

Defenses against vehicle attacks have gotten extra attention in the past year because of terror assaults in England, Germany and France by people who drove vehicles into crowds.

Rojas, the driver in the Times Square incident, made his first court appearance Friday.

He is charged with murder and attempted murder.

He didn't enter a plea and was held without bail. His lawyer didn't comment.