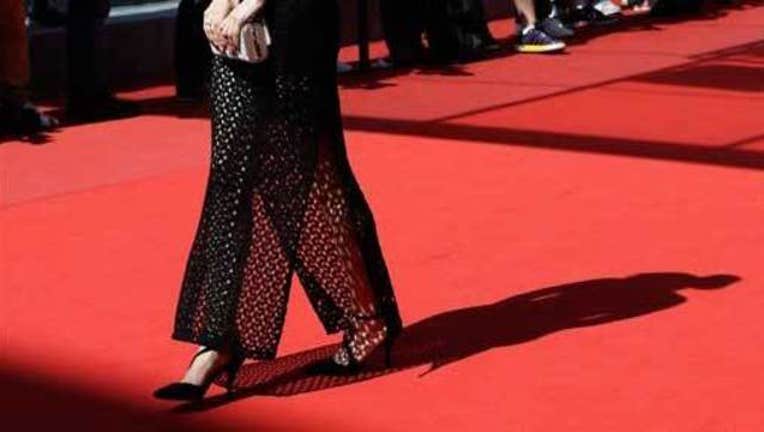 CANNES, France (AP) — The Cannes Film Festival is coming under scrutiny for its strict dress code after women not wearing high heels were turned away from a premiere.

"Everyone should wear flats, to be honest, at the best of times" said Blunt, who was there to premiere the Mexican drug war thriller "Sicario. "You kind of think that there's these new waves of equality."

Director Denis Villeneuve joked that he and his male stars, Benicio del Toro and Josh Brolin, would wear heels to the evening premiere of "Sicario" in protest.

They didn't, of course, sticking with black dress shoes. Blunt wore stilettos with a silver hue, though you could barely glimpse them because of the long silvery sequined dress.

The red carpet at Cannes is highly regulated by tradition. Men must wear tuxedos with bow ties and black shoes, and women are expected to wear dresses with heels. The dress code isn't explicitly spelled out by the festival but is enforced by security guards or "hosts."

"There is no specific mention about the height of the women's heels as well as for men's," Aime said of Cannes' dress code. "Thus, in order to make sure that this rule is respected, the festival's hosts and hostesses were reminded of it."

Some were already calling the incident "Shoegate." Asif Kapadia, the director of the Amy Winehouse documentary "Amy," added on Twitter that his wife was also initially refused entry to his film's Cannes premiere Saturday because she wasn't wearing heels, but she was eventually allowed in.

The dust-up is particularly awkward for Cannes because this year's festival has been marked by considerable discussion about gender equality in the movie industry.