WASHINGTON - Former White House aide Cassidy Hutchinson told the House Jan. 6 committee that her first lawyer advised her against being fully forthcoming with the panel, telling her it was acceptable to testify that she did not recall certain events when she actually did and that "the less you remember, the better," according to a transcript of one of her interviews released Thursday.

The lawyer, Stefan Passantino, denied the allegations, saying in a statement that he had done nothing wrong and had acted "honorably, ethically, and fully consistent with her sole interests."

Hutchinson, who was top aide to former White House chief of staff Mark Meadows, emerged as a key witness in the committee's investigation, delivering compelling live testimony about former President Donald Trump's actions on Jan. 6, 2021. These actions included his directive that magnetometers be removed from a rally of his supporters that day and his angry — and ultimately rebuffed — demands to be taken by the Secret Service to the Capitol to join the crowd.

On Sept. 14, three months after her testimony, she returned to the committee for another private interview in which she recounted the tangled process by which she came to be represented by Passantino. She said that after she was subpoenaed by the committee last year, former White House officials and Trump allies sought to line up a lawyer for her despite her own discomfort at being represented by someone in "Trump world," which she said would make her "indebted to these people." 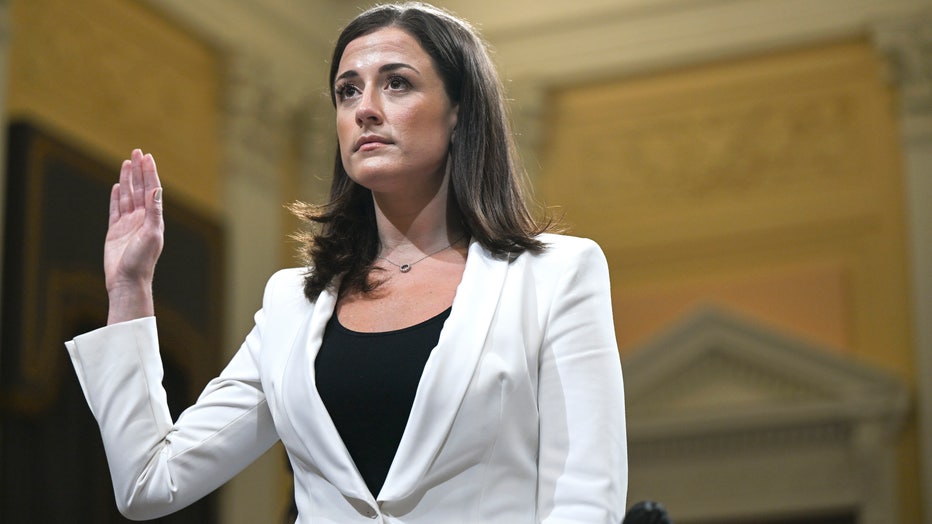 Cassidy Hutchinson, a top former aide to Trump White House Chief of Staff Mark Meadows, is sworn-in as she testifies during the sixth hearing by the House Select Committee on the January 6th insurrection in the Cannon House Office Building on June 28

She said she was contacted in February by Passantino, a former White House ethics counsel, who told her that he would be her lawyer and that she would not have to pay for his services. She said he demurred when she asked where the funding was coming from, though later learned that it was from Trump allies.

"If you want to know at the end, we’ll let you know, but we’re not telling people where funding is coming from right now," she said he told her. "Don’t worry, we’re taking care of you. Like, you’re never going to get a bill for this, so if that’s what you’re worried about."

She also told the committee that Passantino had told her that it was fine to deflect certain questions by simply saying she did not recall, according to the transcript.

She described efforts by the lawyer to shape her testimony, telling her after one practice session not to read "anything about this on the internet."

"He said, ‘Again, Cass, like, just trust me on this. I’m your lawyer. I know what’s best for you. The less you remember, the better. Don’t read anything to try to jog your memory. Don’t try to put together timelines,"' she described him as saying.

Cassidy Hutchinson, a former aide to President Donald Trump and chief of staff Mark Meadows, testified before the Jan. 6 House Committee investigating the Capitol riot, telling them about Trump's efforts to go to the Capitol on Jan. 6. Hutchinson described a physical altercation Trump had with the secret service inside the president's vehicle where at one point the agent grabbed the president's arm to prevent him from taking over the steering wheel from the backseat.

Hutchinson said that during a recess in one interview with the committtee, she told Passantino that "I'm (expletive). I just lied" by telling the committee that she did not know anything about a reported outburst by Trump in the presidential vehicle over his demands to the Secret Service to be driven to the Capitol on Jan. 6 instead of back to the White House after speaking at the rally on the Ellipse.

She would later testify publicly, in one of the more dramatic moments of the committee's hearings, that she had been told that Trump had actually tried to lunge at the agent driving the vehicle.

But she said that when she told Passantino that she was concerned that an aspect of her testimony had not been truthful, he did not encourage her to correct the record, instead telling her, "They don’t know what you know, Cassidy. They don’t know that you can recall some of these things. So you saying ‘I don’t recall’ is an entirely acceptable response to this."

Hutchinson said that when she had told Passantino before the interview about the limousine episode, and that she had heard that Trump had tried to wrap his hands around an agent's neck, Passantino had advised her not to delve into that account with the committee, according to the transcript.

The episode was referenced obliquely in the executive summary of the Jan. 6 committee's full report that was released on Monday, though neither the witness nor the lawyer were identified. The committee released a copy of Hutchinson's interview on Thursday. The full 800-page report is set to be released Thursday.

Passantino denied the claims in a statement provided to The Associated Press.

"As with all my clients during my 30 years of practice, I represented Ms. Hutchinson honorably, ethically, and fully consistent with her sole interests as she communicated them to me," Passantino said. "I believed Ms. Hutchinson was being truthful and cooperative with the Committee throughout the several interview sessions in which I represented her."

He also said it was "not uncommon for clients to change lawyers because their interests or strategies change."

Passantino said he has taken a leave from the law firm where he has worked to avoid being a distraction.