Queen Elizabeth II invoked her late husband, Prince Philip, in a video message Monday to world leaders gathered for the U.N. COP26 climate-change summit in Scotland. The Queen spoke along with Charles, Prince of Wales at COP26.

GLASGOW, Scotland - United Nations Secretary-General Antonio Guterres says the goal of limiting global warming to 1.5 degrees Celsius (2.7 F) is "on life support" with climate talks in Glasgow so far not reaching any of the U.N.’s three goals, but he added that "until the last moment, hope should be maintained."

In an exclusive interview Thursday with The Associated Press, Guterres said the U.N. climate talks in Glasgow, Scotland "are in a crucial moment" and need to accomplish more than securing a weak deal that participating nations agree to support.

"The worst thing would be to reach an agreement at all costs by a minimum common denominator that would not respond to the huge challenges we face," Guterres said. 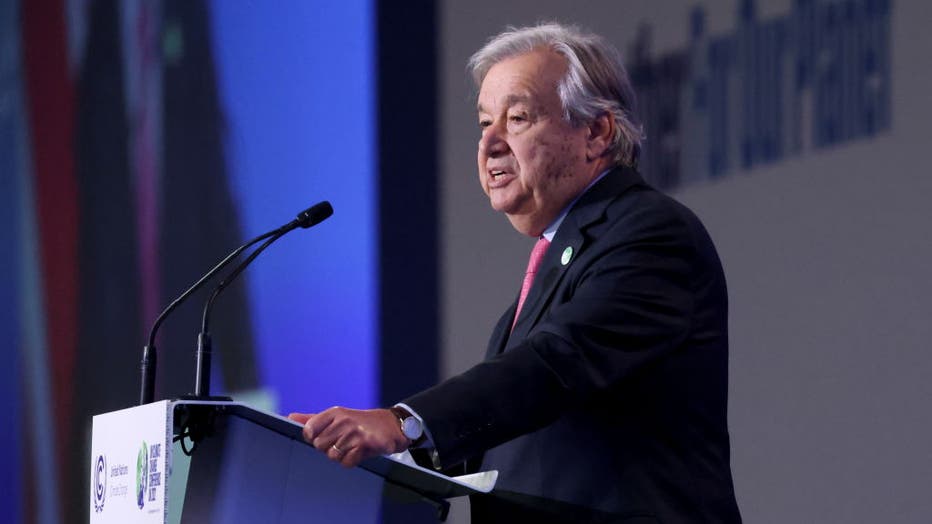 That’s because the overarching goal of limiting warming since pre-industrial times to 1.5 degrees Celsius (2.7 F) by the end of the century "is still on reach but on life support," Guterres said. The world has already warmed 1.1 degrees Celsius (2 degrees Fahrenheit), leaving less than a degree before the threshold is hit.

"It is the moment to reach agreement by increasing ambition in all areas: mitigation, adaptation and finance in a balanced way," Guterres said in the 25-minute AP interview.