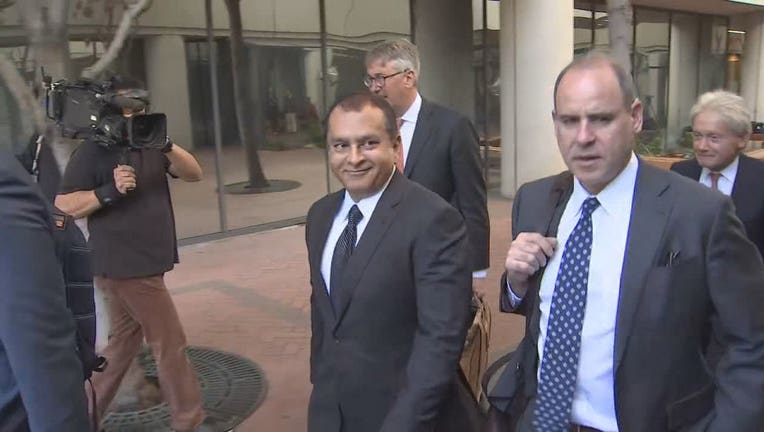 SAN JOSE, Calif. - Less than an hour after Theranos executive Sunny Balwani walked into a San Jose federal courthouse on Wednesday, a judge canceled opening statements because someone on the jury was exposed to someone with COVID.

U.S. District Judge Edward Davila called it a "limited, limited exposure" and said he hoped to be back in session "sooner rather than later."

It wasn't exactly clear, but it appeared as though the case might resume on Friday.

Like Holmes, Balwani faces multiple fraud charges as a co-conspirator in misleading investors and patients.

Prosecutors say Balwaini and Holmes falsely told investors that the company's proprietary technology could perform a wide range of blood tests using only a drop of blood and also grossly exaggerated Theranos's financial standing and profitability.

Balwani 57, has denied the charges facing him.

Prosecutors aren't saying whether they will call Holmes to testify against Balwani.

During her trial, Holmes testified that Balwani sexually and psychologically abused her and controlled her life.

The abuse allegations, which Balwani’s attorney has vehemently denied, were one reason Davila ruled the Holmes and Balwani should have separate trials even though they faced the same criminal charges.

In January, a jury found Holmes guilty of fraud and conspiracy.

She was acquitted on other counts accusing her of duping patients who relied on Theranos’ flawed blood tests.

Holmes, 38, is free on $500,000 bail while awaiting her sentencing in September. That has stirred speculation that she might agree to testify against Balwani if prosecutors agree to recommend leniency in exchange for her cooperation. She is facing up to 20 years in prison.

The Theranos saga captivated much of the country and is now also the subject of a Hulu series called 'The Dropout.