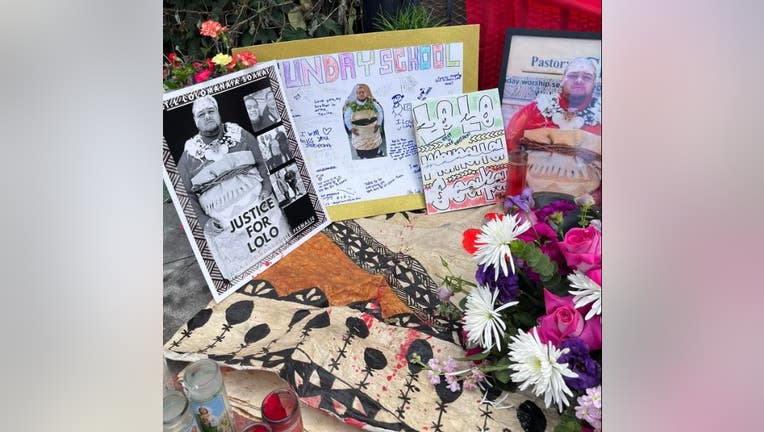 A vigil for Lolo Soakai on International Boulevard where he was killed on June 26, 2022.

OAKLAND, Calif. - The Alameda County District Attorney has charged a 19-year-old following a sideshow where prosecutors said he sped away from police in a series of events that ended up killing a son having a burrito with his mother and cousins.

Linaldi was formally charged on Aug. 29.

Prosecutors say that Linaldi was speeding down International Boulevard about 2 a.m. in a "grossly negligent manner" causing his Nissan 350Z to slam into a row of parked cars and motorcycles, one of which was ejected into the air and landed on Soakai, killing him.

No court date has been set for Linaldi, according to a review of court records.

He is being represented by the Alameda County Public Defender's Office, which did not have an immediate comment.

Prosecutors made no mention that two Oakland police officers intimated an authorized chase of Linaldi, and then fled the scene without providing medical help, two sources to KTVU in June.

In response to that two months ago, Oakland Police Chief LeRonne Armstrong said he placed those officers on administrative leave and opened an Internal Affairs investigation.

As of Tuesday, the officers were still on leave and no discipline has been meted out as the investigation isn't yet complete, Oakland police spokeswoman Candace Keas said in an email.

Soakai was an airline supervisor and a devout Christian, friends and family said.

He and his mother had just finished attending a fellow church member's graduation ceremony in Concord when they stopped by 54 Burrito Truck on 54th Avenue for a late-night snack.  Their cousins and friends were there, too.

Just as they were saying their goodbyes, Linaldi was leading the police chase down International Boulevard.

Not only was Soakai killed, but his mother broke her back and cousins suffered injuries that hospitalized them as well.