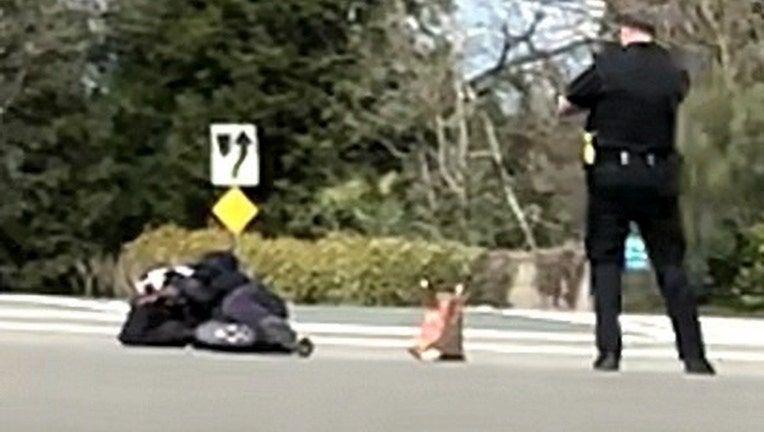 Video grab of Tyrell Wilson, 32, after he was shot by Danville police officer Andrew Hall on March 11, 2021 in Danville, Calif. (Photo courtesy of John Burris)

DANVILLE, Calif. - A Danville police officer pleaded not guilty Wednesday to charges of voluntary manslaughter and assault with a semi-automatic weapon for a 2018 on-duty fatal shooting.

Andrew Hall, who shot and killed two men in separate cases more than two years apart, appeared in Contra Costa County Superior Court in Martinez on the charges related to the death of Laudemer Arboleda on Nov. 3, 2018.

Hall shot the 33-year-old Newark resident Arboleda nine times after Arboleda attempted to maneuver his car between two police vehicles that pulled him over on Front Street in Danville.

An investigation by the Contra Costa County's Sheriff's Office -- which contracts with Danville for police services -- initially cleared Hall of any wrongdoing, something Stern pointed out after Wednesday's hearing.

"I'm also convinced that this is a case brought for political reasons," Stern said. "He was cleared by a thorough investigation. He fired in defense of his life. There's absolutely no question about that."

Civil rights attorney John Burris, who is representing Arboleda's family in a civil suit brought against the county and the Sheriff's Office, said he expected Stern to say that.

The Contra Costa County District Attorney's Office didn't decide to prosecute Hall for the 2018 killing until April 21 of this year, about five weeks after Hall shot and killed homeless man Tyrell Wilson in Danville. Burris is also representing Wilson's family in a civil suit.

"You can't create a confrontation and shoot your way out of it, and claim it was self-defense," Burris said. "The shooting was unjustified and this officer should've been prosecuted. If he had been prosecuted earlier, then Mr. Wilson -- who later was killed by the same officer -- would not be dead."

On March 11, Hall responded to reports of a man throwing rocks onto Interstate Highway 680 from the Sycamore Valley Road overpass. Law enforcement officials have said the 32-year-old transient approached Hall near the overpass with a folding knife and Hall shot him in self-defense.

Wilson, the African American son of a retired of a retired Southern California police officer, died in the hospital the following week. The second shooting is still being investigated. Families of both deceased men have said they suffered from mental health issues.

Hall is currently on paid administrative leave from the Danville Police Department.